On our way back from Greece we picked up some new Greek pom-pom slippers in Athens... 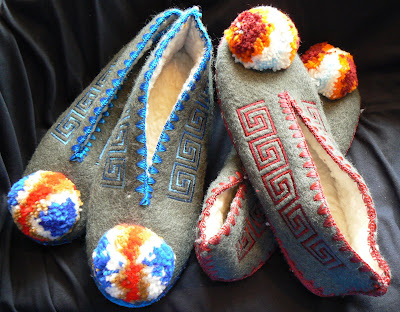 Our last pairs (given us by our friends at Atristico some years ago) have worn well but are showing early signs of dilapidation partly due to the affectionate attentions of our friend Sophie's kittens who, not unnaturally, find the pom-poms irresistible!

Humans, on the other hand, seem to think them faintly ludicrous. For example, when I was hospitalised earlier in the year, I was wandering around in mine and the man in the bed opposite said: "Nice slippers! They must have been a present!"

They are, of course, a somewhat gayer relative of the red 'tsarouhi' leather clogs with a black pompon worn by the Evzoni (Ευζώνοι), the elite ceremonial Proedriki Froura (Presidential Guard), that can be seen guarding the Tomb of the Unknown Soldier (Άγνωστος Στρατιώτης), the Hellenic Parliament and the Presidential Mansion in Athens.

The hourly Changing of the Guard ceremony is a spectacle rivaling the sedate proceedings at our own Buck House, not least because the Evzoni can accomplish a high-kick (right) that would put the most accomplished Can-Can girl to shame!

It is, however, difficult for even the mildly-crass tourist to suppress a fit of the giggles and memories of John Cleese when watching a ritual that is obviously absolutely not intended to raise a smile... 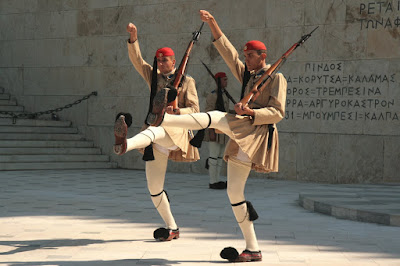 Still pictures simply do not do justice to the event, so here's a short video, after watching which you can imagine David and I performing similar gymnastics in our new footwear!

Any idea how the Ministry of Silly Walks got involved with Greek military custom?
Still, it must be very difficult for the poor guys to "perform" when John Cleese fans from round the world are looking on, tittering!

The routine of the changing of the guard is shown in an early episode of 'Around the World in 80 Days' with Michael Palin who warned that comparisons with his erstwhile writing partner may not be well-received as, for all their appearance, the guards are an elite commando unit and the top fighters in their army. You have been warned!

Prancing about like that, waving their pom poms, you'd think it would be beneficial for them to be able to defend themselves!

I remember being give a Greek guard doll as a child and was enchanted by it.

Get on the wrong side of those Evzoni and they'll kick-box the stuffing out of you before you can say, "Kαλά pom-poms!"