TO BE IS TO DO

Through the kindness of a friend who gave me a copy of Jack Tracy's The Ultimate Sherlock Holmes Encyclopedia, I have been taking a few highly enjoyable return visits to 221b Baker Street where I overheard the great detective make what seems a pretty timeless observation: 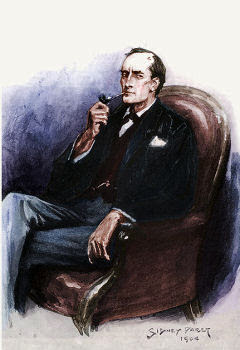 What you do in this world is a matter of no consequence. The question is, what can you make people believe that you have done?
(As recorded by Dr John H Watson and reported
by Sir Arthur Conan Doyle in A Study in Scarlet)

However true that may be, many other things have changed in the 121 years since Holmes and Watson set out to unravel the "scarlet thread of murder running through the colourless skein of life".

For example, Holmes' official portraitist, Sidney Paget (late of The Strand Magazine) may have shown his subject smoking one of his many pipes (above) or, here, occupying a SMOKING compartment when travelling with Watson by train... 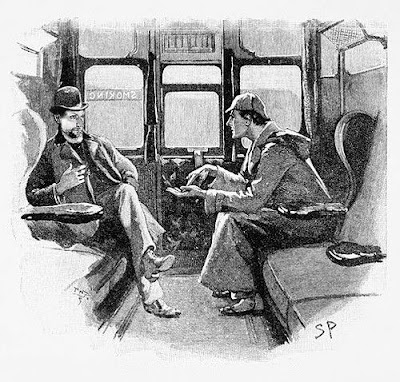 But, today, pipes are definitely not permitted on the London Underground --- even, as you can see, at Baker Street station! 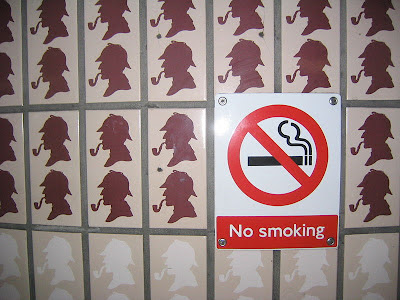 Another excellent picture Mr B, not only because you have observed something ordinary which we all missed (which as Mr Holmes would suggest is the the key to everything)but because you provide us with another gem from Baker Street.Such quotes are pearls beyond price.

This 'no smoking' business is all a bit rum. I was working in a restaurant for a private party when the front doors were locked (one wonders about health and safety at this point) and then the guests who wished, then lit up their cigarettes! A contravention of every no smoking rule in the book ~ there were staff still working in the affected area!
I had finished, I do not hold with the nanny state that has brought this ban to pass, but I do find it somewhat surprising that it should be so flagrantly ignored.