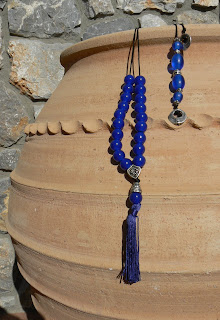 Every Greek worth his salt can handle one and pretty much every tourist takes one home to dangle on the rear-view mirror of their car!

Kompolói (κομπολόι, pronounced koboloi) are Greek 'worry beads' (far left) and the name is derived from the medieval word κομβολόγιον made up of the two words κόμβος ('knot') and λόγιο ('collection') which comes from the Greek expression, 'se kathe kompo leo' (literally 'in each knot he says') and links this fidget device to the komboskini, the prayer beads or knotted prayer ropes of the Orthodox monks.

However, whilst resembling a rosary, the kompolói no longer has any religious significance.

Kompolói come in all sizes (the usual length is approximately two palm widths) and with varying numbers of beads - though always an odd number. There is also a 'head' composed of a fixed bead (παπάς, 'priest'), a shield (θυρεός) to separate the two threads and help the beads to flow freely, and a tassel (φούντα).

A variation on the kompolói (above near left) is a single strand of beads - sometimes only two - that is known as begleri or mpegleri, derived from the verb mpeglerizo meaning 'I roll the dice'.

According to a Greek website (curiously advertising itself as 'A Taste of Greece - without the Travel'!):

The kompolói, or coboloi and was first introduced by the Turks. From the Turks it became popular, as an accessory at the hands of the dignitaries and sovereigns as symbol of force, wealth and power.

Soon kompolóis became popular among the common people as means for meditation and companion in lounging and to calm the pain. Because kompolói is a accessory able to cover various human needs, it passed to the hands of antisocial elements. For them it became symbol of independence, freedom and reactive and rough behaviour.

The above, in addition to the intensification of the production and the rhythms of life after the second World War, lead to the decay of kompolói, since the new conditions and ideologies created societies of people struggling to success and survive.

In our age, when rhythms of life are exhausting and stress, shopping, drinks, smoking, depression and antidepressant drugs have become a matter of everyday life, kompoloi makes a dynamic come-back and offers many solutions to the 'dead ends' of contemporary life. Because kompolói is:

o A way of giving up bad habits, such as smoking, nervousness or comfort eating, or biting our nails

o A jewel, when it is strung with valuable beads made of amber, semi-precious stones or precious metals

o A remedy, when it is made of semiprecious stones, which radiate a health-enhancing energy

o A piece of art, when it is designed with high standards of aesthetics

o A collector’s item, as it can be rare, beautiful, and precious

o A symbol of strength, power, when it is artistic and precious

o An amulet, when it contains symbols of our beliefs and good luck

o A psychotherapist, because the massage to our fingers can relax our neural system

o A home decorative for our the furniture, table and the walls

o A joy for our senses, with its purling beads, silken touch, vibrant colours, and the magical scent of amber and aromatic wood

o A personal trainer, because we can use it to train our fingers' skills

o An heirloom, redolent of our forebears’ lives and the tales they told, and bearing the story of our own lives forward to generations to come

o A medium between man and God, because it can be used as a rosary to count prayers

o A symbol of wealth; it points out that we have plenty of free time

o A reflection of our personality, as it reflects our ego, in the same way as our car or our house does

This is why we are not exaggerating if we say "show me your worry beads and I’ll show you who you are". Indeed, kompoloi is not just a fashion fad: it is a necessity! It is the jewel of men and the symbol of independency for women. Instead of smoking cigarettes one after the other, or yelling out angry vocals, lets keep or fingers busy with our favourite worry beads.

So, now you know - although I have to say, I have yet to see any 'independent' Greek women demonstrating their skill with the kompolói...

Nikolas Glinatsi and his fiancé, Eleni, gave me a kompolói and a beglari as a going-away present this year... 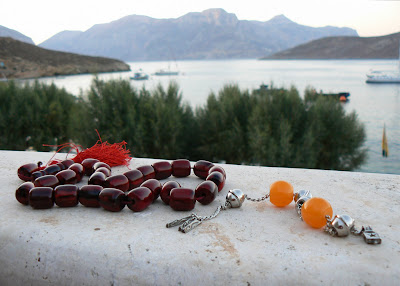 Whilst I have 'played' with Greek worry beads for a number of years, I am far from accomplished, so here's Nickolas' father, George Glinatsi, demonstrating how to do it properly.

First, here's how to handle your kompolói...

And now the beglari technique...

Hmmm... Well, I guess I'll just have to keep practising and hope I can show some improvement before next year!

Well, I was a bit disappointed that after the huge build-up, there was just a video of a guy playing with some beads which didn't look, at first glance, like it could match up to the advertising spec ! In addition, as I am working towards entering one of the professions you mentioned, I was slightly worried I might be replaced by them in time. I was rather relying on the continuance of universal uncertainty and misery as a by-product of our modern society !

Actually it is harder than it looks - believe me! Bruised knuckles are a major hazard and - if you once lose your grip on them - broken glass and crockery and even major eye-surgery can result!

OK, I'm convinced.There could be a career for me in helping people recover from trauma caused by major surgery !

Wonder a worrywart is and if you truly are one?

The job of worry is to anticipate danger before it arises and identify possible perils, to come up with ways to lessen the risks, and to rehearse what you plan to do. Worrywarts get stuck in identifying danger as they immerse themselves in the dread associated with the threat, which may be real or, more likely, imagined. They spin out an endless loop of melodrama, blowing everything out of proportion. "What if I have a heart attack?" "What if there is an earthquake?" "What if someone breaks in when I'm asleep?"
While worrywarts insist worrying is helpful, little is solved. Stuck in thinking ruts, they stop living in the here and now--the present moment. Worrywarting is torment--a kind of self-imposed purgatory that makes you feel bad, stresses you out, and wastes precious moments of your life.
Worse yet, worry begets more worry, setting into motion a vicious circle of frightening thoughts and anxious response. It is self-perpetuating, pushing into greater anxiety and more worry. Allowed to continue unchecked, chronic worry can evolve into panic attacks and, in extreme cases, agoraphobia, which is a paralyzing fear of having a panic attack, especially in public. It can be so severe that, in the worst cases, the sufferer can't leave home.
For how to stop worrywarting and start worry smart, visit my site.

Brian, perhaps David could do some magic trick with the kompoli, ask him...

Good idea! Maybe he link two kompolói together or make beads disappear off one kompolói and appear on another... I'll get him to work on it before next year! :-)

I've never seen women using these on my travels in Greece. They are far too busy with tasks unlike the men who sit practising kompoloi in the cafenions!

I've got a kompolói (brought back from Greece by a friend, since I have never been there in spite of being obsessed with Greek mythology when I was 11 and promising myself I would visit that country some day), but it's not very nice. It's a bit boring, and I don't know how to 'use' it. I will practise with it and then maybe get a prettier one. Thanks for the clip. :-)

BELA - Good luck... It is quite relaxing; the only trouble is, outside of Greece it does look a bit poserish!

Brian, I have no intention of doing it in public.:-)

Dear Uncle Brian, My favourite olive wood komboloi only has an even number of beads. Should I be worried?
Worried Blue Eyes of Ascot

Yes, ROGER you should be very worried indeed: you've either forgotten how to do simple adding up or you've been sold a pup! You need to get Someone to lodge a formal complaint with the KKK*

Thanks, Uncle Brian, the reply I got from the KKK suggested three possible reasons:
1)It was an illegal Albanian import and I should have bought it on Kalymnos, not Alonissos.
2)A witch curesed it with the evil eye
3)It was part of a PASOK/KKE plot to destabilise the Greek state and make way for a Communist takeover