IF YOU WANT TO GET AHEAD...

David and I went to a fabulous exhibition recently at the Victoria and Albert Museum.

Hats: An Anthology by Stephen Jones is a perfect exhibition: packed with fascinating stuff, but not so big and sprawly that you get totally exhausted by walking and looking.

The premise is simple and direct - an exploration of what people have worn on their heads over the years around the world and how those hats - over 300 of them, ranging across many centuries - have inspired modern hatters such as Jean Paul Gaultier, Vivienne Westwood, Christian Dior, John Galliano and, of course, Stephen Jones. 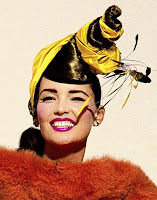 And in telling that story, the exhibition inevitably touches on why people wear hats.

"A hat," says Jones, "makes clothing identifiable, dramatic - and, most importantly, Fashion.... It's the cherry on the cake, the dot on the 'i', the exclamation mark, the fashion ficus. Everyone from showgirls to dictators knows that by wearing a hat they will be the centre of attention." 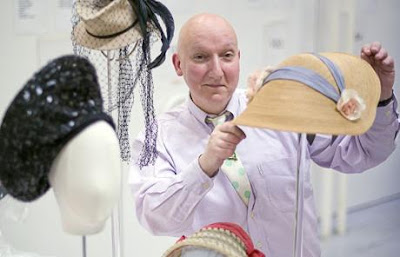 The co-mingling of helmets, fezzes, turbans, Egyptian Anubis-head masks, Doge's caps and plastic Cinderella tiaras for little Disney princesses, alongside all manner of beautiful and bizarre headgear from the roaring twenties via the swinging sixties to the latest and zaniest creations of Mr Jones and Co is fascinating, informative and fun. 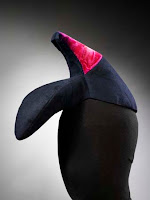 The use of materials is only limited by the confines of the milliner's imagination and ingenuity and the hats on show are made of leather, fur, feathers and flowers, baubles, bangles and beads - not to mention twigs, twisted wire, paper, lollipop sticks, shoes (left, courtesy of Dali) and sheets of heat-twisted plastic that end up looking like the wearer has been hit on the back of the head by a bucket of water... 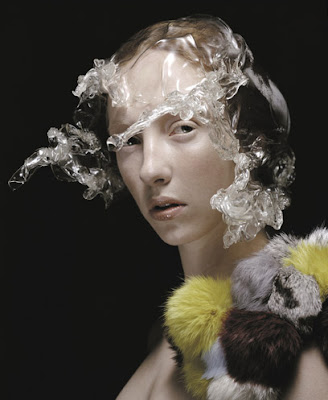 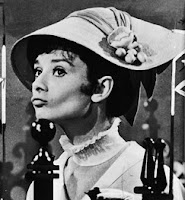 There are many surprises: obviously from the extraordinary scope of 'ideas' (a hat designed to look like a jellyfish with trailing tentacles, a little cap based on the London underground sign); but also from opportunity to scrutinize a number of hats that once adorned famous heads - from Queen Victoria's Bonnet and Prince Albert's topper to hats designed by Cecil Beaton for Julie Andrews and Audrey Hepburn (right) in the stage and film versions of My Fair Lady, a Marlene Dietrich beret and an amazingly exotic concoction worn by Carmen Miranda. 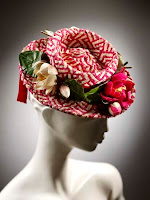 The exhibition also allows the visitor to take a peek into the Aladdin's cave that is the milliner's studio and workshop: a place littered with pins and pencils; tracing paper and cardboard; pots of glue; scissors and shears; blocks for shaping; weird, spiky contraptions for measuring heads and making patterns; sketches; swatches of material; bales of fabric; cascades of ribbons and cornucopias of bells and buttons and bows.

From one such fantastical laboratory, here's a glimpse into the making of a typical (and suitably patriotic) Stephen Jones hat...

So hats off to Mr Jones and the V&A for a diverting exhibition that remains on show at the Victoria and Albert Museum, Cromwell Road, London SW7 until 31 May; open daily 10.00–17.30, Fridays 21.30.

The exhibition is accompanied by an elegant adornment for every hat-wearer's coffee-table: Hats: An Anthology is a superbly illustrated book offering an intriguing insight into the world of millinery. Drawing on the V&A’s extensive collection of hats, Stephen Jones’s own archive as well as iconic headgear from around the world, the book's various chapters examine the inspiration behind the creation of hats, the history of their construction, the lure of the hat shop and, finally (and I quote), 'the etiquette and occasion of hat wearing for the client'.

So, if you really want to get ahead...

I'm not really a hat person. Well, that's not true. I like basic hats but then they get a little crazy.

It's like a pizza. Cheese, tomato sauce, pepperoni - that's a pizza. But, in some places, they'll throw anything on it. All fancy - eggs, spinach, big fungus things and so on. But, to me, that's no longer a pizza. That's a meal on a bit of bread.

Hats can be the same. At some point, they just become that bit of bread for people to throw stuff on. Did anyone ever wear those hats with fruit on them? A portable picnic. But rarer still is the meat hat - a beautiful construction with a raw slab of steak on top and half a cooked chicken.

You know what? If Stephen Jones reads your comment he'll probably create (if he hasn't already done so) a pizza hat!