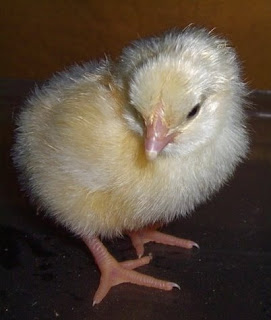 Yesterday - which, according to the meteorologists (and we all know how much they know) was the last day of Winter - Sue and Andy in Greece - where it's not much warmer than it is here - sent me this photo of their first (and newly hatched) chick. This little bird seemed to me to be chirping an endorsement of the poet Shelley's question "can spring be far behind...?"

However, I have to confess, I'm a little confused.

You see, while the aforementioned meteorologists categorise today as the first day of spring, according to the astronomical definition spring doesn't actually arrive until the Venal Equinox which, this year, falls on March 20th.

So, if winter ended yesterday and spring doesn't really arrive until the 20th, what are the next nineteen days supposed to be?

SPRINTER, perhaps... Depending, I guess, on how fast they go by...

Hmm, well, yes, all is very confuse, because is Spain is still winter!!, is amazing, in England is spring and in Spain is winter....winter until about 20th of march...:/

Well I reckon spring is sprung: yesterday evening just before sunset I heard the birds chirping away happily the way they tend to do in spring & summer. What a beautiful noise!
subery: songs sung by happy birds at sundown

EUDORA - Obviously Spain sticks with the Venal Equinox --- and quite right, too!

SUZANNE - Yes, the little blighters have been keeping me awake as well! :-) Another sign of spring having pretty much sprung is the mass of crocuses (or crocii) in our local park. If they were daffodils, I'd be tempted to call them a 'host'...