Sticking with the Carrollian theme of the last couple of days, here's an alternative Mad Tea - or, rather, Breakfast - Party...

Incidentally, have you ever wondered where Messrs Snap, Crackle and Pop came from? Well, it all started in 1933 when Kellogg's were promoting Rice Krispies with a radio commercial that announced:

Listen to the fairy song of health, the merry chorus sung by Kellogg's Rice Krispies as they merrily snap, crackle, and pop in a bowl of milk. If you've never heard food talking, now is your chance. 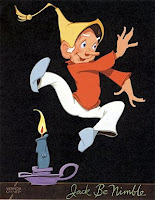 At this point, the American illustrator Vernon Grant enters the story. Grant was well known for creating pictures featuring nursery rhyme characters, gnomes and fairy folk and, inspired by that radio commercial, drew three elves whom he named 'Snap', 'Crackle' and 'Pop'.

Vernon Grant showed his illustrations to Kellogg's who instantly bought the characters and commissioned Grant to create a long-running series of adverts and premiums (give-aways) featuring these three personifications of Rice Krispies' krispiness! 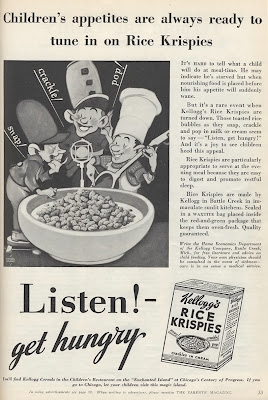 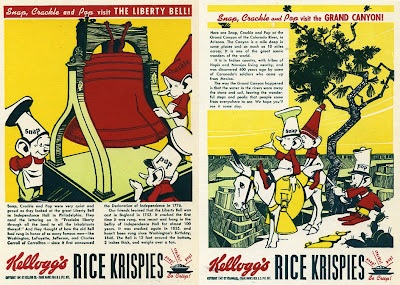 Curiously - since we've recently been talking about hats and hatters - each of the Rice Krispies kids sports a highly individual type of headgear.
According to Kellogg's mythology, SNAP is the eldest and leader of the group. He is a baker, wears a chef's hat and solves the problems his two brothers create...

CRACKLE is the good-hearted, fun middle child who gets stuck keeping order between his brothers’ personalities and wears a red-and-white-striped stocking cap...

There was also a fourth (but short-lived) elf named POW who represented the explosive nutritional value of Rice Krispies! Ah, well, three's company, four's a crowd...

Snap, Crackle and Pop have got through various metamorphoses with the passing years, taking on three-dimensional puppet form in the 'forties.... 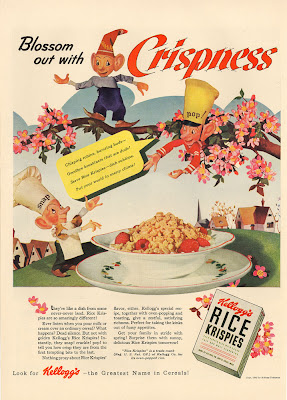 And in the 'fifties having their own pop (or snap-crackle-and-pop) band...

The explanation for the 'sound' of Rice Krispies is that, as they are toasted, the cooked and dried rice 'berries' puff up to many times their normal size. Since the weight of the rice berry and its material mass remains nearly the same, the rice material is stretched to formthe very thin walls of the Rice Krispies structure. When subjected to a change in heat (such as cold milk being poured onto them), a severe 'stress' is set up and these thin wall fractures - creating the uneven absorption of milk by the cereal bubbles and a resulting SNAP! CRACKLE! POP!

Amazingly, Snap, Crackle and Pop are still busily working for Kellogg's today, and not just in the USA and Britain, but in various other parts of the world, where they are known by other names: in Sweden, for example, they are Piff! Paff! Puff!; in Finland, Poks! Riks! Raks!; in Germany, Knisper! Knasper! Knusper! and in Mexico, Pim! Pum! Pam!
Whether the Rice Krispies in those countries actually make those sounds is, I'd suggest, open to debate! 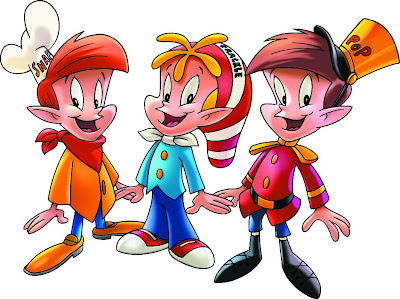 I can't remember if they feature in the current add, which I think has children counting the number of Snap, Crackle and Pops. That's a bit ridiculous, because it's on quite often. It obviously hasn't grabbed my attention - unlike another couple of ads.
Inevitably when we're sitting down to eat, this kid's voice announces 'Mum. I want to have a poo at Johnny's' - not the most appetising of declarations!
Then there's the sanitary products ad. declaring 'have a happy period'.Well, all fellow lady followers of your Blog will realise that that's a contradiction in terms if ever there was one.
And to get back to your original subject, I'm now stuck with the rather addictive ditty 'I'd rather have a bowl of Coco Pops' in my head.

No porridge then? What kind of a Scot are you?

I quite often make myself porridge for lunch.

I remember a scene in "Futtock's End" - the silent film of the early 70's, with no dialogue but lots of grunting and other sound effects. With a nice take on the Snap, Crackle and Pop theme, Ronnie Barker comes nervously down to breakfast clutching his head because of a severe hangover and has milk poured on his Rice Krispies to the sound of loud bangs and gunfire. The adverts are so ingrained in the British psyche that no explanation was necessary.

LISAH - Nothing wrong with porridge for lunch - provided you use (as I'm sure you do) a spurtle...

SHEILA - Thanks for the reminder of Futtock's End, I'd quite forgotten it. Dear Ronnie B as a kind of latter-day Fred Emney and Michael Hordern as the uppity butler: brilliant!

Yes, thanks Sheila - the memory of Futtock's End has brought a big smile to my face.

What's a spurtle - it sounds the sort of thing that would be found at Futtock's End.

Shame on you and you a bonny Scottish lassie an' all...

Here's the definition of a 'spurtle', although I thought every crofter's cottage had one hanging by the fireplace...

"The spurtle (or 'spirtle') is a Scots kitchen tool, dating from at least the fifteenth century. The word may derive from the Latin 'spatula' and it was originally a flat, wooden, spatula-like utensil, used for flipping oatcakes on a hot griddle. This terminology is now confined to Angus and Perthshire.

"Over time, the original implement changed shape and began being used specifically for stirring oatmeal and soups. The rod-like shape is designed for constant stirring which prevents the porridge from congealing and so becoming lumpy and unappetising. It looks like a fat wooden dowel, often with a contoured end to give the user a better grip. It is in common use throughout Scotland, although it is rarer in Angus and Fife where the term 'theevil' is used.

"There is a World Porridge Cooking Contest known as 'The Golden Spurtle'."

But there's an obvious reason why I'd never heard of it nor use a spurtle - I cook the porridge in the microwave.

And I add a little salt before cooking and then sprinkle demerera sugar on top. The nicest I've had it was when I was up in a hotel in Scotland (come to think of it, it might have been in the Lake District) and it was served with cream, honey and whisky.

PS - I forgot to thank you for describing me as a 'bonnie lass.'

You should have gone to Specsavers