Writing about Mount Rushmore yesterday - albeit in a jesting fashion - led to my learning several fascinating bits of history...

For example, I was intrigued to know that Thomas Jefferson was originally to have been sculpted on George Washington's right, but when the rock was found to be unsuitable the third President of the US was dynamited off the face of the mountain and eventually re-carved on Washington's left...

Not only that but, as sculptor Gutzon Borglum's model (below) shows, the four Presidents were originally to have been carved from head to waist but - despite costing $989,992.32 - there wasn't enough money to create more than their heads. 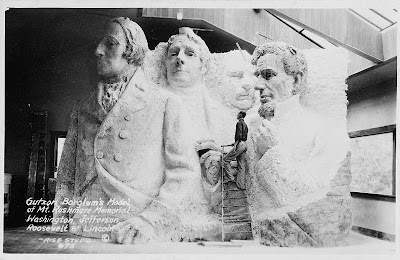 I also happened to come across this image showing an additional fifth head... 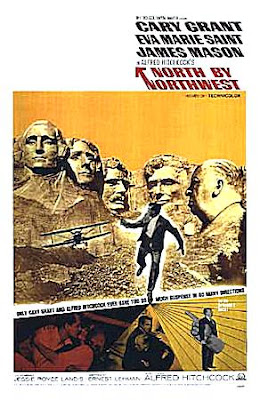 But, as it was never added, I assume there must have been some kind of a hitch!
Sorry! I couldn't resist!

Anyway, if you're not totally bored with the subject, here's an interesting article on the Mount Rushmore achievement.

When I was little, I was convinced that Mount Rushmore was ALL of the US Presidents... When I actually saw a picture of the whole thing and realised there were only four of them, I was really disappointed!
stfel: a quality of rock which turns out to be unworkable

Following on from your confession, I'll admit that when I was little, I thought it was a natural phenomenon: a mountain that looked like the faces of American presidents! How dumb is that?

Maybe you should do a blog about childhood misunderstandings? Here's another one for you: I thought that cats were female and dogs were male and that they mated to make (male) puppies and (female) kittens....
cressen: the incredible gullibility of kids

OMG! You mean that's not what happens??