I seem to have gathered rather a lot of fridge magnets over the years and looking at them the other day, I realised that they represented a kind of saga of my life (and the lives of my friends) over the last decade or two. 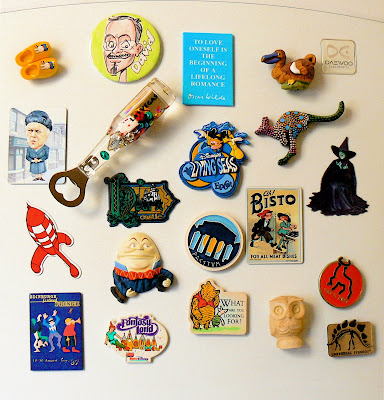 So I thought I'd make a small, but representative, selection of the dozens of magnets currently on display, relieve them of the notes and out-of-date vouchers they normally keep in place and share with you their origins which turn out to be quite international... 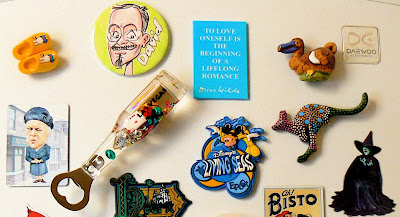 Cartoon of David by a caricaturist with whom he worked at some corporate dinner. She caught something of his character really rather well: the impish twinkle, perhaps, just before he produces your chosen card!

One of Oscar Wilde's cleverisms purchased in the shop at London's National Portrait Gallery on a trip there with our friends Val and Michael..

I'm not sure where I got the ceramic dodo, but I've always had a kind of empathy with these absurd, hapless birds so cruelly condemned to extinction by unthinking Man.

Second Row: Ena Sharples (a memorable early character in Coronation Street, played by Violet Carson) from the shop at Granada Studios in Manchester, during a visit there with my best mate, radio producer, Malcolm Prince, when we were making a series about soap operas. Alas, the Studio Tour is now sadly closed to visitors.

Las Vegas bottle opener brought back from the Strip by my old pal, Irascian. Decorative and functional - the gift, I mean, although the same could also be said of the giver!

Souvenir of The Living Seas pavilion in EPCOT Center, Walt Disney World, Florida, the opening of which I attended with my good friend and fellow Disney historian, Richard Holliss. You won't find Mickey Mouse there these days as it's been re-vamped as The Seas with Nemo & Friends. Hmmm...

Keepsake from Hearst Castle, San Simeon, California, the fabulous, fanciful home of William Randolph Hearst who was the original inspiration for Charles Foster Kane in Citizen Kane. It was bought on a unforgettable visit with the aforementioned Malcolm Prince when we were driving from San Francisco to LA during the making of a radio series about Walt Disney.

The Wicked Witch from The Wizard of Oz, although I'm not sure where she came from -- other than the West, obviously! 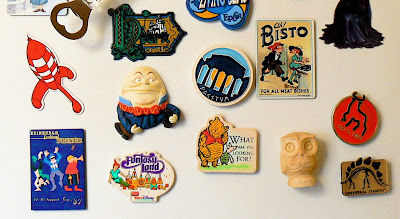 Third Row: Rocket from the Tintin adventures Destination Moon and Explorers on the Moon bought at a Hergé exhibition which David and I visited at the Centre George Pompidou, Paris.

John Tenniel's Humpty Dumpty (from Lewis Carroll's Through the Looking Glass) bought from that Carrollian cornucopia in Oxford known as Alice's Shop.

A stylised representation of the classic Doric architecture of Paestum, brought back from Italy for us by Richard and Chris Holliss. A reminder that whilst we know Venice like the back of our hand, most of Italy is, well, a foreign country to us...

"Aah, Bisto!" The classic 'twenties advertisement featuring the Bisto Kids by cartoonist Wilf Owen. This came from the nostalgia section of the shop in the Imperial War Museum. Not being a great lover of planes, tanks and guns, I'm afraid I spent most of my time in the shop!

100% Toro from Spain, courtesy of our own dear Polkadotsoph. Like all great logos, it's 100% simple and effective.

Bottom Row: Edinburgh Festival poster from our last visit in 1997 - goodness, is really that long ago?

One of a set of magnets given away with Findus frozen products in 1992 when Disneyland Paris had just opened and was still known as EuroDisneyland. Of course I have the complete set (God knows how many packets of fish fingers I had to get through!) but this magnet is of my favourite section of the park, Fantasyland, and features Peter Pan.

E H Shepard's Pooh and Piglet (though manufactured under license from Disney, naturally!) with a caption that I used to try and heed when approaching the fridge in the days of my diet! I must start looking at it again!

Athena's Owl from a tat-shop in the Plaka, Athens. True, the head is too big - but then maybe that's due to all the wisdom crammed within!

Memento of the Jurassic Park attraction at Universal Studios in Los Angeles, visited during yet another American jaunt with Mr Prince. "Was this work?" you ask. Well, let's just say it was research!

This is, believe me, only a fraction of the stuff on our refrigerator. I'll give you a further tour another day.

In the meanwhile, why not tell me - or show me - what's on your fridge?

You BOUGHT your Tintin rocket magnet? I have the whole series that came free with a packet of biscuits or something! But then I do live in Tintin country!
enpengu: a flimsy faded insignificant scrap of paper kept meticulously in place by a fridge magnet long after it lost its relevance

Yep, I bought it! Another souvenir of Gullible's Travels!

I was wondering why you left out the Daewoo fridge magnet (top row, far right) - until I realised your fridge must be a Daewoo. Could only afford a Candy myself...

Apparently "canes" wasn't accepted by the word verifier, so we move on to:

It's a very small fridge - when all the magnets are on it you can't actually see it any more!

I love the Tintin magnet but I would have expected that to be representative of Belgium rather than France.My own lack of a collection is due to changing fridges recently !
Thanks for the birthday references. Not sure I quite like being considered as an insect but its not the first time ! Anyone that wants to know what Boll Weavil look like (and indeed sound like) can visit us at http://www.youtube.com/watch?v=HD2bVNAI8m8 and find out.
dischaya: A feeling of suddenly having a birthday and not feeling anything about it

Oh, I so shouldn’t have read this post, only because I had so much to get done today. Instead of knuckling down I pulled out the two metal tins on one of the back shelves here and had a good snoop through them. Inside... treasure!

Travelling around I’d never opt for great big souvenirs that would be difficult to manhandle, instead picking up little nick-nacks along the way like a small, four-inch high “totem pole” from Vancouver and a fridge magnet from the city’s aquarium; various badges from museums and galleries; little character models from theme parks, which include a Looney Tunes Road Runner pencil that has a plastic cactus top with a curved stalk coming out of it attached to a little Road Runner figure that can be twirled around (odd, I know).

Most of the time, when travelling all around the States and Canada, I picked up matchbooks from hotels, restaurants and bars in the various cities. So, from the pile there’s Ellen’s Stardust Diner, Ruby’s River Road and Benny’s Burritos from NYC; Sloppy Joe’s (Key West); Pat O’Brien’s (N’Awlins); Sun Dial Steak Restaurant (Atlanta); The Dubliner (Washington DC); Bull & Finch Pub (Boston); Billy Goat Inn and Ed Debevic’s (Chicago); Gold Spike (San Francisco); Duffy’s Shamrock (Denver); Barney’s Beanery (LA); Elephant and Castle Pub (Toronto); Space Needle Restaurant (Seattle), along with just about every casino in Las Vegas (at least at the time I was there).

However, there is one favourite magnet here. Though not on the fridge, it’s stuck on the side of the file cabinet beside the desk holding up photos of myself and The One That Got Away, who is striking a very enigmatic pose.

On the magnet: a round yellow face with two black eyes. Instead of a curved smile, the mouth is a horizontal black line.

Underneath it are the words: HAVE A DAY.

BOLL - Sorry about the insect thing, but you chose the name! ;-) Happy birthday, anyway!

GOOD DOG - Apologies for the lost hours, but many thanks for sharing the treasure trove from those tins. Funny, isn't it, how little knick-knacks are often more evocative than the substantial souvenir?

The Road Runner pencil sounds a real collector's piece. As for 'HAVE A DAY', that's a brilliant slogan!

Oh, no apologies needed. It was great to take all these little souvenirs out and have a look at them again.

There was even an untouched bar of soap from Caesars Palace, stamped with Caesar’s head (making it look like a big, thick coin) that cam in a little plastic bulb. And, boy it honks when you take the lid off. I don’t know what they used to perfume it but if they had lobbed this at the Visigoths then Rome would have been saved.

And twirly plastic drinking straws with Mickey and a very angry Donald Duck clinging on to them.

And, best of all, an Applause Looney Tunes mug that, bizarrely, I picked up at a rest stop in Maryland. I can’t find a picture of it – and don’t have a digital camera so can’t take a snap – but it has Road Runner racing around the side. Then, on a very wide handle is a downcast Wily E Coyote, standing on a sputtering ACME rocket, holding a sign that says YIKES!

Closest I could find is this Bugs Bunny mug, which is from the same set. Because of the size of poor, downcast WEC on my mug, there’s very little space to get the fingers around the handle.

Because I took the three-month tour around the States on my own, all the photos from the 40-odd rolls of film were landscapes or architecture. (I appeared in one, when someone took a shot of me on a boat trip out of Key West). So all the odds and ends go toward reminding me that I was actually there.

So, today has been a good day, bringing back a lot of brilliant memories. Thanks for that.

Thanks, GD, glad to know someone else keeps piles of what Other People would call "junk". How little they know!!