As someone whose life has always been shaped by books, I thought I'd celebrate this day devoted to the encouragement of reading with a Wordle incorporating the names of many of those authors who've impacted on my pleasures, thought processes and, indeed, my career... 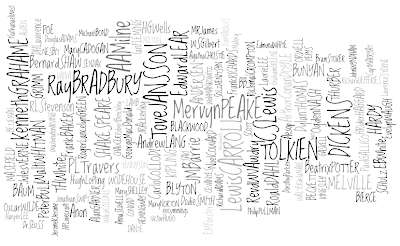 Click image to enlarge
This is also a good day to remember that wherever people are reading books there are others who are prepared to ban or even burn them: it was true of, among others, the Third Reich who set fire to anything that did not correspond to Nazi ideology, the Muslims who burned The Satanic Verses and the American fundamentalists who put a match to Harry Potter. 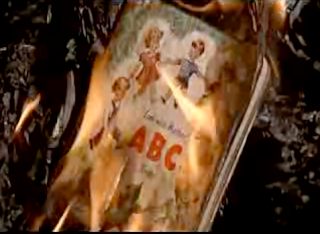 Fahrenheit 451 is the temperature at which book-paper catches fire and burns and Bradbury's futuristic nightmare describes a time when firemen start rather than put out fires...

It was a pleasure to burn. It was a special pleasure to see things eaten,
to see things blackened and changed...
while the books went up in sparkling whirls
and blew away on a wind turned dark with burning.

In 1966, François Truffaut made a memorable film of Bradbury's story accompanied by a dynamic score from Bernard Herrmann. The film not only captured the spirit of the original book but also the very essence of Bradbury and his pyrotechnic prose...

Well, it's a job just like any other.
Good work with lots of variety.
Monday, we burn Miller;
Tuesday, Tolstoy;
Wednesday, Walt Whitman;
Friday, Faulkner; and
Saturday and Sunday, Schopenhauer and Sartre.
We burn them to ashes and then
burn the ashes.
That's our official motto...

YouTube currently features a couple of powerful sequences from Truffaut's film. I'm not able to embed them on my blog, as that facility has been prohibited, but you can view them on their site and today is a good day to do so...

One is of the dramatic scene when the questioning fireman, Guy Montag (Oskar Werner), witnesses The Captain (Cyril Cusack) and the fire crew burst into the home of the Book Woman (Bee Duffell) and set fire to the contents of her hidden library... 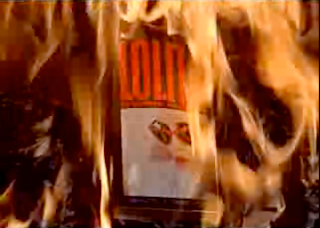 The other features the film's moving conclusion when the renegade Montag, now on the run from the authorities, encounters the Book People who, whilst the volumes they love have been destroyed, manage to keep them alive by memorizing the texts of Plato, Charles Dickens, Jane Austen, Machiavelli, Lewis Carroll, and many other writers, including, Truffaut tells us, Ray Bradbury! It is, simply, one of the great endings in cinema... 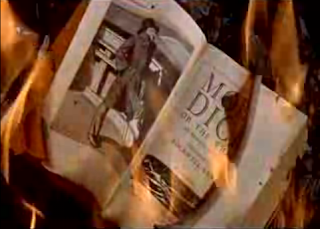 I'll conclude with this story from within the story...

There was a silly damn bird called a phoenix back before Christ, every few hundred years he built a pyre and burnt himself up….

But every time he burnt himself up he sprang out of the ashes, he got himself born all over again. And it looks like we’re doing the same thing, over and over, but we’ve got one damn thing the phoenix never had.

We know the damn silly thing we just did. We know all the damn silly things we’ve done for a thousand years and as long as we know that and always have it around where we can see it, someday we’ll stop making the goddamn funeral pyres and jumping in the middle of them. 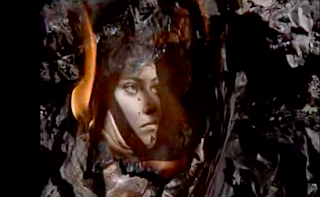 Read my interview with Ray Bradbury, The Bradbury Machine.

And you can discover more about Ray Bradbury's books at Bradbury Media.

Well I didn't know it was book day today. Every day is book day as far as I'm concerned... Your blog reminds of a long wait at an airport some years ago when I read one of the worst books of my life - by a well-loved author whose name I shall not reveal so as not to offend their fans. I read through the whole book at the airport, and then PUT IT IN THE BIN. This was over 20 years ago and I still can't believe I did it! I still have other books in my collection that I absolutely hated, but I hang on to them so that I remember that I read them!
cosecta: the very last fragment of words in a book that remain when a book burns, just before the whole thing disappears in a cloud of smoke (as illustrated by some of the photos in your blog today)

Hooray, another mention of Bradbury! And a very nice piece of blogging. (And thanks for the link to mine!) Any prizes for being the first reply of the day? No, thought not!

Your Wordle got me thinking about authors who have a unique surname, and those for whom we (you actually!) feel the need to include the first name or initial letters. I noticed you have Tolkien without initials, but Milne and Travers with initials.

In the case of Bradbury, it's vital to distinguish between Ray and Malcolm, I suppose. But how many other literary Peakes or Whitmans are there?

Bapti: Naming of an author without initials.

SUZANNE - How intriguing! I'd love to know who the author was - unless, of course, I'm their No.1 fan! I also hardly ever bin a book - however awful - it seems such a denial of the struggle of authorship...

PHIL - No, no prizes which is just as well because if there had been you'd have lost out to Suzanne!

The thing about author's names is interesting: on an earlier Wordle I made I used more surnames (Whitman, Milne, Peake, Pullman, Shaw, Wilde etc) but I then decided to put in some of the forenames (or initials) to give greater variety to the pattern.

Obviously 'White' is useless without 'TH', 'EB' or 'Edmund' and, interestingly, even writers as well known as Lewis Carroll or C S Lewis would not immediately be recognised by the simple use of 'Carroll' or 'Lewis'!!

It's interesting to compare the single name issue with actors, singers and movie stars. Again, there are relatively few and most of them are known by the surname alone - Gielgud, Olivier, Brando, Redford, DiCaprio, Streisand - while only a handful are known just by the first names - Judy, Marilyn, Bing and Fred (with Ginger) come to mind.

But are there, I wonder, any authors known only by the first names?

OK - to satisfy your curiosity Brian, it was Agatha Christie and I can't remember the name of the book. And amongst the books I hated there is notably "Middlemarch"... which I finished, and "Vanity Fair" which I didn't...!
PHIL - One of the advantages of living in a different time zone! Although I have to admit that this morning I was VERY late up! (10 o'clock would you believe!)

Ah, Dame Agatha! I'm not a huge fan, although I've read and enjoyed several (I think she's a bit patchy) including one I particularly liked - because it strayed into realms of the metaphysical - called The Mysterious Mr Quinn and I do like Miss Marple as a character: although I can never decide whether I prefer the more authentic Joan Hickson portrayal or the outrageous Margaret Rutherford version!

Never tried to get to grips with Middlemarch and, like you, gave up on Vanity Fair, settling for the movie instead. I did, however, adore Thackeray's children's story The Rose and the Ring.

I love the film Farenheit 451 since I was a child, since the first time a I wachted the movie; I was very impressed by the story, for me the books were something sacred, with my 8 or 9 I didn't understand why those fire men burned the books... Yes, wonderful film this of Truffaut

Yes, EUDORA, it is a great film. What it lacks in elaborate sets and locations and sophisticated techniques it makes up for with story, character and a wonderful integrity...

As you are too modest to be able to do so, I'll say that your interview of Bradbury in 1988 is one of your best.It gets to the very heart of what the great man is all about - a message of universal truth for everyone,that life is for living with all that that entails.Brilliant !
LOINGLYF:the expression with which a man looks at his screensaver, one of the usual sort, recently lifted from the Sibley Blog.

I've been desperately trying to think of an author known only by their first name... and I'm stumped.

You could ALMOST get away with Agatha. Or Enid.

For a long while Harlan would have worked. Until Mr Coben came along and made Mr Ellison non-unique.

A bit easier if they have two first names. In science fiction, for example, there would be Philip Jose (Farmer) and Arthur C. (Clarke). I know, this is cheating!

I particularly enjoy Bradbury discussing a school district in the US who wished to use F451 in their reading program, only as long as they could censor certain words and passages. He retorted that F451 was all about freedom of speech.

The Reading Mother
by Strickland Gillilan

BOLL - You're probably the only person (other than me) who's heard that interview! I think the one that I linked to at the end of the post also has some interesting things to say...

Sibley screen savers? You are not (I am proud to say) the first user I've heard of, but which image(s) do you have?

ANON (Cerumental) - Great story about Ray and the Educationalists! I can hear him telling it!

And thanks for 'The Reading Mother'. I'm ashamed to say that I'd never come across the poem or heard of the poet.

I note from Wikipedia that Strickland Gillilan was also credited with what is said to be the shortest poem ever written:

'Lines on the Antiquity of Microbes'

I think it will come as a great surprise to us, Brian, if you ever do a Blog that isn't terrific.

I'm off to a busy weekend conference - probably will have very little time to myself, if any. But, I think I'll take the laptop with me - don't know if I could cope with Brian's Blog withdrawal symptoms, even for a couple of days.

You won't be missing much, LISAH, and anyway there won't be another blog until the weekend, so leave the laptop at home and have a good conference!