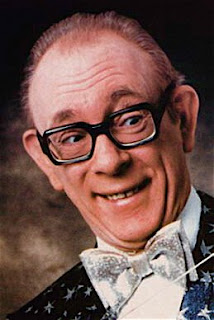 A fond and sad farewell to our good friend Ali Bongo.

The President of The Magic Circle, Ali was one of the most quirkily inventive magicians of our time.

Born William Wallace in India, Ali became known throughout the magic world as the 'magician's magician'.
The author of many books of magic, often illustrated in his own distinctive cartoony style, he also worked as an adviser on countless films, plays, operas, ballets and TV programmes, teaching non-magician actors how to convincingly perform illusions on stage or screen.

Ali would later serve as the inspiration for Alan Davies' popular television character, Jonathan Creek, and acted as the series' magical consultant. 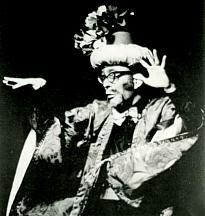 A great comedy performer in his own right - his crazy, Arabian Nights-inspired wizard act, the Shriek of Araby was a tour de force of anarchic zaniness - he spent much of his career as a back-room-boy for two of the greatest television magicians of the twentieth century, David Nixon and Paul Daniels: advising them on their magic and devising new tricks and illusions for their shows.

Ali appeared on many of Nixon's shows: sometimes in the guise of a bewigged footman named Alistair, sometimes as himself, but always to ensure that the front-man magician got the magic right!

Here he is assisting David Nixon with an illusion of his own devising, featuring the American performer, Barbara Hanna.

Funny, generous-hearted and hugely knowledgeable, Ali was universally respected and loved by the magical community. He was presented with The Magic Circle's Carlton Award for Comedy in 1983 and was elected as the society's President last year although he had already long been an unofficial, international ambassador for magic.

His passing means that there's suddenly a little less magic in our world...

There are a number of interview clips with Ali on the BBC's web-site page for Jonathan Creek in which Ali talks about the series, magic, Harry Potter and The Magic Circle.

The Lasting Tribute website has updated its memorial pages to include the wonderful Ali Bongo.

It's a respectful memorial to our favourite magician and somewhere to pay tribute to his glittering career.

EVERY comment is monitored so that nothing offensive or inappropriate is published.

A lovely article on one of my favourite childhood magicians. I was wondering if magic ran in the family was he inspired by his parents. There doesn't seem to be biography on his life. Thank You