My recently-published biography of Peter Jackson has just been given a really good review (or "write-up" as my old Dad used to call them) in December's issue of Total Film... 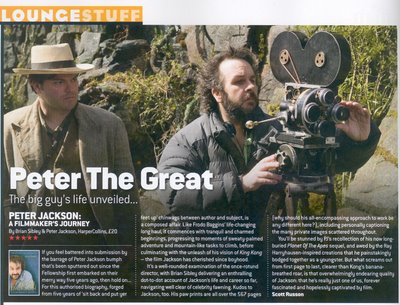 And already, it seems, there is new material accruing for a 'Revised Edition' now that Middle-earth is waiting with bated breath to discover who will be approached to direct The Hobbit now that Jackson appears to be officially
off the project.

Millions of fans of The Lord of the Rings trilogy are wondering whether anyone other than Jackson and his team can hope to succeed in bringing Tolkien's Rings 'prequel' to the screen. Maybe it's all bluff and brinkmanship on the part of New Line Cinema and/or the King of Wellywood, but there's no doubting that any interloper trying to break into Bag End and get the co-operation of Mr Bilbo Baggins is going to have to combine the magic-craft of Gandalf, the wisdom of Elrond, the statesmanship of Aragorn and the courage of Frodo.

Meanwhile, Richard Taylor has revealed that Weta Workshop are not discounting their possible involvement... But then would anyone in Hollywood be daft enough not to ask them? Er... YES! And at least three members of The Lord of the Rings cast - Ian Holm, Hugo Weaving and Ian McKellen must be wondering what the chances are of reprising their roles...

During the writing of the Jackson biography, I had a long conversation with Peter - not in the book - about his possible ideas for The Hobbit which included some intriguing thoughts about characters and casting. It would be a pity if they were to end up as nothing more than a footnote in some future paperback edition of Peter Jackson: A Film-maker's Journey - especially since following Mr Baggins "There and Back Again" would have been an interesting extension of that Journey...

However it all gets sorted - or doesn't - I've got a couple of nice souvenirs of my association with Rings such as this Gandalf Hat given to me by my good friend Ian Smith. 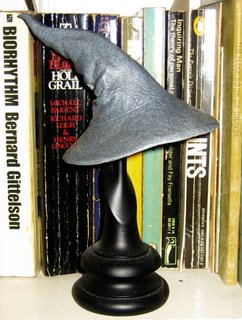 "So what?" You ask. "Lots of collectors have one of those!" Indeed... but not many, I'd guess, have been personalised by Ian McKellen, the wizard himself, with an inscription that runs halfway round the brim before disappearing down into the point! 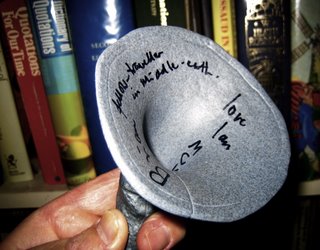 Congrats on a great review. But it's the January issue not the December one. You can tell this because it's the issue that most of us get in mid-November!!!!

I'd like to be jealous and say how lucky you are having a Gandalf hat actually signed but that would be sour grapes especially since you were the provider of my own personal favourite item of memorabilia - well both of them in fact. First of all a signed 'Unsung Story' and secondly, a Leslie Bricusse signed 'Scrooge' soundtrack album. I doubt anything will top those items !

Thanks, Ian, for putting me straight (never easy) on that...

You actually TOLD me it was from the January issue when you sent it to me - but I was so excited about the content, I forgot about the detail!

As for Gandalf's Hat - just remember this: one day, it (and a LOT of OTHER STUFF) is going to end up in the Will... So, just make sure (not too difficult) that you all outlive me!

That's a morbid thought. I think all of us would rather have Mr B around for as long as possible !

Phooey! I just received the December issue a few days ago, so I'll have a long wait before I get to read this article if it is indeed in the January issue. It takes a while for the magazine to get to me from across the pond.

I had to smile at the your comment "However it all gets sorted - or doesn't...." followed by the photo of Gandalf's hat. Your word "sorted" and the photo reminded me of the sorting hat from Harry Potter.

I fervently hope the issues between Peter and New Line can be resolved so that Peter will direct the new films. No film involving Middle-Earth will be the same without him. *is sad*