Mention, yesterday, of the death of lyracist Betty Comden prompts me to moan about something that’s been niggling me for months and which is well overdue for getting off my chest!

It seems impossible nowadays to pick up a box or packet of anything edible without seeing the self-evidently unnecessary disclaimer: SERVING SUGGESTION.

I mean, is there - seriously - anyone in the known universe who is going to open a box of breakfast cereal carrying a picture of a ceramic bowl of the said cereal with milk and a spoon who is going to expect to find in addition to the cereal, a dish, a spoon and a quantity of fresh milk? I don’t really think so…

Now, what's this got to do with the late Ms Comden you ask? Well, the English National Opera’s sell-out 2005 production of the Leonard Bernstein-Betty Comden-Adolph Green musical On the Town ("New York, New York, it's a helluva town!") is slated to return to the ENO in 2007 and, once again, they are advertising the show with a sexy photo of a smiling sailor pointing directly out of the flyers in a cheeky pastiche of the famous ‘Uncle Sam Needs You’ poster. 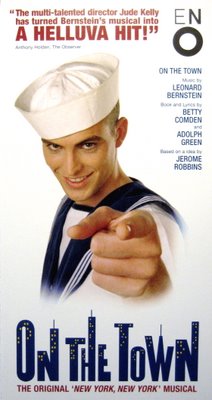 Of course, I am well aware that all opera singers aren’t necessarily built like Luciano Pavarotti and this young man certainly isn’t… But then neither is he an opera singer - or indeed even a member of the cast of On the Town…

The saucy sailor-lad inviting you to book your seats at the London Coliseum is, in fact, professional model, Mark Kidd, snapped by the talented enetertainment photographer, Jon Stark

So, where are the words SERVING SUGGESTION when you actually need them? Nowhere!
Posted by Brian Sibley at 00:00

Brian, would anyone who is interested really NEED a serving suggestion for this attractive young gentleman ? More like just the opportunity I would suggest.....

Well, Brian... do you REALLY need serving suggestions here?! I ask you!...

You are both OUTRAGEOUS! And have totally (and I'm sure deliberately) misunderstood this post!

What I meant was that the flyer should have 'SERVING SUGGESTION' because this particular item - viz. the lad in the sailor suit - was not going to be found inside the Coliseum any more than the bowl, spoon and milk on the cereal box...

As for what you two TOOK me to mean --- well, I simply couldn't comment!