THE RABBIT WHO DECLINED TO BREED

There was once a Rabbit who refused to breed, declining absolutely and without any apparent remorse, to indulge in the business of procreation that so occupied all the other rabbits in the warren. 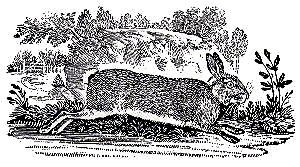 The Bachelor Rabbit maintained that his decision was a moral stand against the threat of over-population. However, others were soon putting around the story that his abstinence was, in truth, a clear indication of moral corruption and sexual deviancy.

Concerned that their young might be at risk from his unnatural perversions, the community ostracised the Bachelor Rabbit and avoided all contact with him. The single Rabbit, nevertheless, remained surprisingly cheerful and resolutely refused to be rushed into the mating game merely in order to save his reputation.

One day a Polecat caught and was about to eat one of the warren’s most prolific breeders, a rabbit who had already fathered several dozen young and whose sexual prowess showed no sign of flagging.

The Bachelor Rabbit, seeing the Father Rabbit’s plight, hopped swiftly over and pleaded with the Polecat on his behalf. “Please,” he begged, “this rabbit has a huge family to support, I have none. Eat me instead.”

The Polecat who had already breakfasted on two starlings and a baby ferret and was, therefore, not hungry enough to eat both rabbits agreed without hesitation, gobbled up the Bachelor Rabbit and allowed the Father Rabbit to go free.

Later, passing the warren, the Polecat heard the rabbits discussing the incident and praising the Polecat's generosity and thoughtfulness in ridding the rabbit community of a perverted and morally bankrupt misfit.

The Polecat smiled to himself. “How strange!” he thought, “It was merely an economic decision: given a choice, why would I eat a rabbit who still has many years left in which to provide me with new generations of breakfasts, lunches and dinners?”

This is very similar to the rabbit story I heard when living in Mansfield some 20 years ago.The field the warren was in was plagued by a fox but the bunnys kept it at bay by going out in large numbers so the fox didn't know whom to go fo.A small number though, acting independently on promises of personal safety and more food were removed elsewhere. The number that remained were not sufficent defence and were soon gobbled up. The punchline though, is the same as your story. The aggressor had the last laugh, picking off those he had seperated at his whim and twenty years on, there are no warrens at all in Mansfield.If you dance with the devil, he doesn't always play to the rules of the other side !