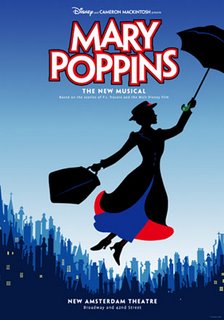 So, the stage musical of Mary Poppins has opened on Broadway to pretty much universal acclaim with a fistful of fairly supercalifragilistic reviews, including this one by Jim Hill.

The Practically Perfect Poppins is now looking set to entice and delight New York theatre audiences as successfully she has been doing for the past two years in London.

By all accounts, the show has transferred from one side of the Atlantic to the other pretty much in tact, much to the surprise of some skeptics and doom-sayers, I don't doubt...

I'm sure, therefore, that on the arrival of Mr Banks' former governess - the formidible Miss Andrew - young Michael still delivers the line: "She looks like something that would eat its young!"

At every performance I saw, this description of the harridan of a nanny, got a HUGE laugh from the audience, but it always struck me as being way too adult, clever and cynical a remark for a little boy to have made and was really allowing us to evesdrop on the authorial voice of the show's witty book-writer, Mr Julian Fellowes.

But it was only today, while leafing through one of my favourite loo-side books, The Little Book of Venom, that I came across the origin of the line and realised just how adult, clever and cynical a remark it truly was, having been coined by New York's mistress of the poisoned pen, Miss Dorothy Parker, who once wrote of the English actress, Edith Evans: "To me, Edith looks like something that would eat its young!"

One can only hope that, during her stay at 17 Cherry Tree Lane, Mary Poppins succeeded in introducing Master Banks to one or two writers whose work was a little more suited to his tender years - such as, perhaps, the books of P L Travers...?

I always used to wonder what would happen if the Eastenders turned their televisions on for early evening viewing " Cor blimey ! Strike a light ! They've got CCTV in Albert Square"