NOT FLOATING, BUT DROWNING… 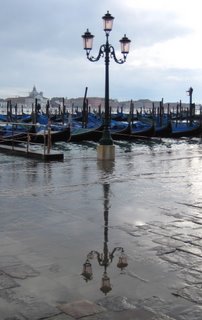 The breathtaking miracle, the enduring mystery of Venice is that it is afloat; that the palaces and churches - filled as they are, like jewel caskets, with some of the greatest art treasures in the world - seem to drift, dream-like, on the waters of a lagoon daily replenished by the Adriatic that lies just beyond the protecting sand-bar that is the Lido di Venezia.

This is the wonder of Venice: that this city is, in fact, an archipelago of many small stone-flagged islands, linked by numerous bridges and encrusted with monuments of great antiquity and beauty and that - incredible though it seems - it is built on water…

However, as everyone knows, Venice is now sinking… A complex entanglement of causes (environmental, ecological, industrial and commercial) have led to a change in tidal levels and the slow but relentless erosion of Venice’s watery foundations… 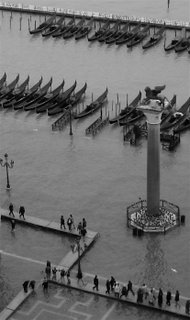 Year on year sees an increasing incidence of acqua alta, or high tides, that swamp the squares, courts and streets, pouring into the doorways of homes, shops, restaurants and churches and forcing residents and tourists to either don Wellingtons and wade through the flood waters or else file along the passarelle, a zigzagging causeway of elevated duckboards…

In the year 1900, high tides flooded the St Mark’s Square on just seven occasions but as the 20th century wore on, so the number of times that Venice was awash increased. By 1989, the city experienced 40 days of acqua alta and, within just seven years, that figure had risen to 99 days of flooding out of 365.

Sixty years ago today - 4 November 1966 - Venice experienced its worst-ever flood when the high tide reached a record 1.94 metres and the Piazza San Marco was underwater to a depth of 1.20 metres.

A plaque on the base of the Campanile (and another halfway up the wall of the famous Harry’s Bar) show the high-water mark and commemorate one of the most devastating days in Venice’s recent history on which many hundreds of works of art were destroyed and 5000 Venetians lost their homes.

Ironically, for all its damaging implications, acqua alta provides a fascinating, transient opportunity to reflect upon Venice in a magical water-mirror. 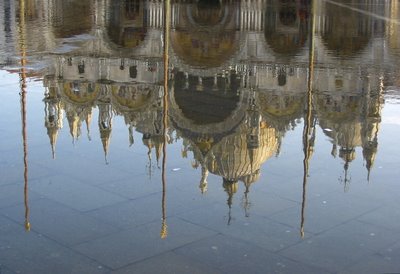 But whilst seeing this glorious city when the tide sweeps across the Molo into the Piazetta San Marco and bubbles up through the drains in the square itself is an intriguing and unforgettable experience, it is salutary to consider - as the water laps around the marooned chairs outside the grand cafes - that standing in Venice is like standing on the deck of a great, battle-scarred ship that is now far from seaworthy and may very well soon succumb to the relentless buffeting of the seas and finally sink, Atlantis-like, beneath the waves… 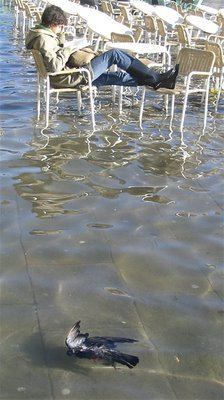 I have blogged another Venetian photograph on today's Window Gazing.

another good picture Mr B - the one of the dead bird floating that is !

No, I jest... And there was a certain poignancy about witnessing a death in so beautiful a place (even of a pigeon) and especially a death that went unnoticed by anyone but myself...

echoes of the famous picture of the human dead on the beach last year as the tourists walked by. Where was that ? Somewhere in Asia, I think

I never saw that... How terrifying.

This shot and the others showing the flooding in Venice were taken on 27 December 2004, the day after the Asian Tsunami when flood waters in the city reached one of the highest levels for several years.