On the very last day of hostilities, no less than 863 men and women lost their lives…

The total death-toll for WWI - from the British Empire alone - numbered 947,000… 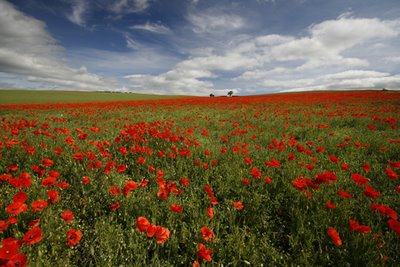 [The Poppy Field image comes from George Ledger Photography and is the copyright of the photographer.]
Posted by Brian Sibley at 00:00

If ever you visit Belgium, you really should try and get to Ypres (Wipers as the war veterans used to call it). There is a permanent exhibition in the old Cloth Hall: In Flanders Fields is a journey through the history of WWI view from all aspects, with memorabilia, music, sound & visual effects. Probably one of the most interesting exhibitions I've been too, and definitely the most moving; I always come out of there with a lump in my throat.
Their website is www.inflandersfields.be

I saw, a procession of men coming down and their faces were set like sphinx. They were carrying one of their falls that had got into the way of some shells and they were bringing him down (all that remained of him) - a mass of mangled flesh and bone, to give him 'a place' as they call it. A heroes burial in a foreign land.If only some of the men that were responsible for this sacrifice were made to stand upon this spot for for one minute of the day, it would soon put an end to all this. This is the place they call Ypres that once, so they tell me, one of the prettiest places in Belgium. There is nothing left now but bricks and rubble and half of that is blown away.And out the ground there come great tongues of fire, these are the guns of the RGA and naval guns.

Joseph Bodill (driver with the BEF) 1915

Now, no more
The passing bells of death
Ring over hill and sunset spire,
To wake the sleepers from their earthen beds in France
With shrieks of wild, banshee bombs
Or ripping, ragged roads to rest
On rusted wire.

Just pilgrims tread
To soothe the ways
That tired and aching boots
First sowed,
To grow, like poppies,
Ever red:
The Verdun route,
That long and bloody
Menin Road.

Pray, stay only the paths of travellers now
And ever let all generations come,
To read the sacrifice and know how
Many costly games of war were done;
And at Thiepval let them share
With those at peace, untroubled minds,
So they may trust that we can build a future
With no drawn-down blinds.


After all this strife has past, I shall no doubt read these words and wonder. But no one, only those that have been and seen and thought like I have done, will beable to realise why I wrote like it.It is because I have read it in deeds and expressions, the sights of suffering amongst a generation of men, born for liberty.

Thank you so much for these thoughtful contributions...