It's Christmas Day
in the Morning... 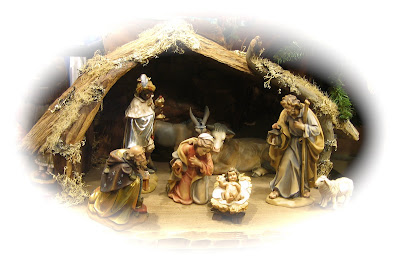 ...and we're just back from the Basilica San Marco, where the faithful were celebrating the first Mass of Christmas. Visit the Cathedral when it is unlit and you might consider it nothing more than a grey, dusty mausoleum, but when illuminated - as it was tonight - it is flooded with a breathtaking golden radiance... 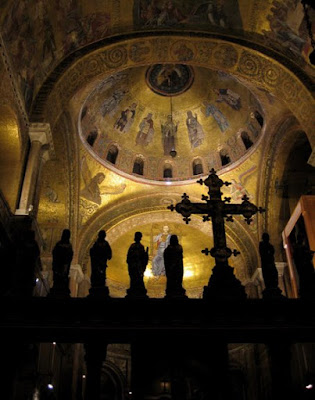 It is, perhaps, the nearest experience to being inside light: warm, reassuring, womb-like; a cradle in which we - together with the new born Christ Child are gently rocked to and fro within the golden heart of an ancient Faith - beating, pulsating across the centuries...

***
Now, what kind of greeting should I send you on this very special day?

Well, I think what would be appropriate would be to quote one of the lyrics written by LESLIE BRICUSSE for the 1970 film...

Bricusse wrote the song, 'December the Twenty-Fifth', for the scene featuring Fezziwig's Ball, in which Ebenezer Scrooge relives the Christmas jollifications that he enjoyed as a young man before he became - as Charles Dickens describes him - "a squeezing, wrenching, grasping, scraping, clutching, covetous, old sinner!"

The song is sung by Scrooge's former employer, Mr Benjamin Fezziwig, his wife, family and guests and - although written by a later hand - is truly the embodiment of the seasonal spirit which Dickens was attempting to invoke in writing A Christmas Carol...

Of all the days in all the year
That I'm familiar with
There's only one that's really fun
December the twenty-fifth!

Ask anyone called Robinson
Or Brown, or Jones, or Smith,
Their favorite day and they will say
December the twenty-fifth!

At times we're glad to see the back
Of all our kin and kith
But there's a date we celebrate
December the twenty-fifth!

At times our friends may seem to be
Devoid of wit and pith
But all of us are humorous
December the twenty-fifth!

And now, before you set about your own festivities, enjoy the original film rendition of 'December the Twenty-Fifth' as it was energetically performed by Laurence Naismith and Kay Walsh as Mr and Mrs Fezziwig, throwing themselves into the spirit of the day with total abandonment whilst being observed by Albert Finney as Ebenezer Scrooge and Edith Evans as The Ghost of Christmas Past...

So, from David, buttons and myself may we wish You and Yours...

A Very, Very
HAPPY CHRISTMAS
m'dears!
***
Images: San Marco on Christmas Eve © Brian Sibley; Title-cards from Scrooge by Ronald Searle. You can see more of Searle's artwork for Scrooge and Dickens' A Christmas Carol at Perpetua - Ronald Searle Tribute.
And buttons offers his own seasonal greeting here.
For more Venice imagery, visit my website to view the album Venice Observed and then follow the links at the foot of that page to three further albums of photographs.
Posted by Brian Sibley at 01:30

Admirable sentiments Mr B and it's always worth quoting one of the highspots of my favourite of all Christmas films !
And so, as Tiny Tim observed,
'God bless us, every one'
Hope you're having a good time.Yuletide felicitations from all of us here in Blighty.

ONANTS : A comfortable feeling found to exist when all the obligatory Scrooges have been watched and one finds oneself dibbing into the second tier for the 1938 Reginald Owen version.

And to All of You from Both of Us!

Yes, Happy Xmas to everyone!!!!

And to you, EUDORA!