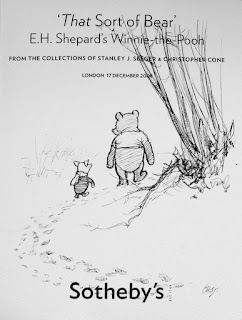 Every now and again a job comes along that I would have paid good money to have done if I hadn't first been offered money to write it! *

When a nice man at Sotheby's (who's a Doctor, a Specialist and a Deputy Director, no less) politely if I'd like to write an introduction for 'That Sort of Bear', the auction catalogue for Wednesday's sale of Winnie-the-Pooh drawings (along with some Very Important First Editions) I obviously jumped at the chance.

With only forty-one lots, it is a select sale; but every one of those lots is a gem: signed limited editions of A A Milne's Pooh and Christopher Robin books and dozens of E H Shepard's original pencil sketches and pen-and-ink illustrations of Pooh and his friends, Piglet, Eeyore, Tigger and the Others up to various adventures and escapades in and around the 100 Aker Wood. 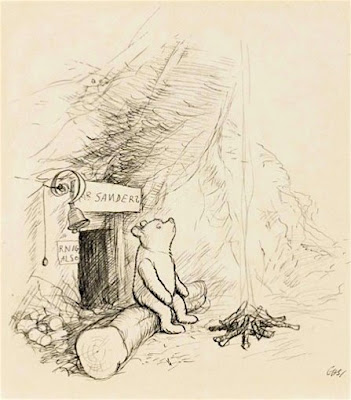 The title for the auction is - as ever Poohologist will know - is a quote from Winnie-the-Pooh Chapter Seven, 'In which Kanga and Baby Roo come to the Forest and Piglet has a bath.': 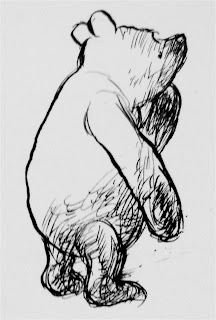 "Without Pooh," said Rabbit solemnly as he sharpened his pencil, "the adventure would be impossible."

...Pooh went into a corner of the room and said proudly to himself, "Impossible without Me! That sort of Bear."

The collaboration between author and illustrator is one of the most remarkable and happily-matched of its kind. As I note in my introduction...

Milne was first and foremost a playwright and the dialogue in the Pooh books is clearly the work of a dramatist.

Accordingly, Shepard became an actor, visualising the characters in pen and ink and bringing them to life with his confident, seemingly effortless, line. Milne tells us what Pooh and the others do and say, Shepard shows us how they do and say it. 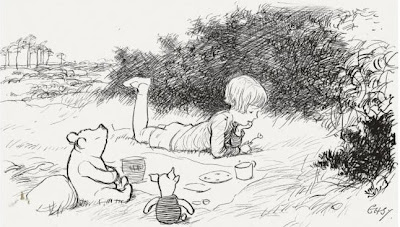 A testament to this creative partnership is found in the second lot in the sale: a presentation copy of the first American edition of Winnie-the-Pooh inscribed by A A Milne to E H Shepard with the following dedicatory verse...

When I am gone,
Let Shepard decorate my tomb,
And put (if there is room)
Two pictures on the stone:
Piglet, from page a hundred and eleven,
And Pooh and Piglet walking (157)...
And Peter, thinking that they are my own,
Will welcome me to Heaven.
The estimate on that particular item, which came originally from Shepard's personal library, is a modest £15,000-20,000. I say 'modest' because the original illustrations themselves have estimates from anything between £25,000 and £60,000! But, if you have (or had) enough pennies they'd be worth every one of them! 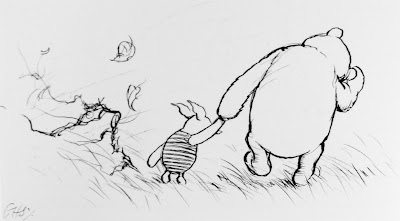 You can view the lots and/or order the catalogue here.

* Actually, they are taking so long to pay me that I feel as if did pay good money to do it!!

A reminder that my Christmas entertainment, And Yet Another Partridge in a Pear Tree... starring Penelope Keith is being repeated on BBC Radio 7 today at 11:30 and 21:30 hour and can then he heard, on line, courtesy of the BBC iPlayer for the next seven days.

It's times like this that I wish to God that I was rich!

Could you not have negotiated for one of the sketches instead?

GOOD DOG - How much do you think they haven't paid me yet?!

We really enjoyed And Yet Another Partridge, Brian: a lovely seasonal presentation with just the right voice for your words.
SHMETO: A tune that gets stuck in one's head after a brief snatch is heard from a distance. In my case this morning: George Michael singing Last Christmas ..., fortunately erased by The 12 Days of Christmas.

Over here Mr B, in sunny Gran Canaria, Pooh is named ´Puuh´ for some reason. If anyone does have a spare 60k, you could probably afford a burger each here with the Euro in terminal decline. At least the weather´s OK (29 today)!

OSINGULS : A rogue feeling that briefly enters ones head when sitting on a camel riding over the Maspolomas dunes that everyone you know is probably colder than you are or paying for their own heating.

Pooh Bear has always been one of the Bear Necessities of my life - wish I could afford one of those drawings!
amentest: the final call of an auctioneer before the hammer goes down
Has anyone noticed that since we started this crazy word game, the word tests have more vowels than before?

SHEILA - Thanks! And I'm glad we squeezed George Michael out of your mind... :-)

BOLL - Are you MAD??!! You're on HOLIDAY and you're not only bothering to find an internet cafe in order to comment on this blog, you're spending valuable time out of the sun tracking down the Gran Canaria pronunciation of 'Pooh'!

SUZANNE - I think 'amentest' is also a phrase used in several church circles for that "One, two... One, two..." thing that the minister has to do in order to check the efficiency of the PA system...

I think someone should go out to Gran Canaria and remind Boll that he's meant to be on holiday.
Anyone care to sub my fare out there?
Henesso: An addiction to the Sibley Blogspot, for which there is no known cure.