Here's a treasure from my A Christmas Carol collection - the original pastel illustration by CHRISTIAN BIRMINGHAM for his 2001 edition of the book... 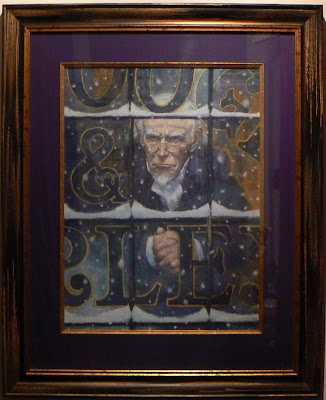 Click on image to enlarge
I love this picture! The framing device of Scrooge & Marley's office window; Ebenezer's clenched hands and his pinched and grimly set expression; and the multiple layers of the image itself: Scrooge behind the window, snow falling in front of the window and reflected in the window itself, the shapes of lit windows from the opposite side of the street...

There is a certain kinship between Birmingham's graphic interpretation of the story and that employed in RICHARD WILLIAMS' wonderful 1972 Oscar-winning TV film version of Dickens' story, illustrated with animated equivalents of elaborately cross-hatched 19th Century book engravings in the style of artists such as John Leech who illustrated the original book.

The voices include Alastair Sim and Michael Hordern recreating the roles of Scrooge and Marley that they had played in the 1951 live-action film, Scrooge, and Michael Redgrave as the storyteller. Although it only runs for a mere 24 minutes it, nevertheless, captures the story's many textures - bleak as a windswept churchyard, rich as a Christmas pudding drenched in brandy and set alight - and drives home its simple yet compelling moral...

It is a masterpiece to be savoured and enjoyed as an annual treat...

I think I watched this Christmas Carol of Alistair Sim and etc. when I was very, very young, in spanish of course, I always like the story, worlwide, as don Quixote I think.... in fact Dickens is a cervantinian writer.

You are so lucky to own this piece of art! What a marvelous picture.

Every year I have watched the Alastair Sims "Christmas Carol" with my father, until I came to Korea four years ago, and it's hard to find decent Christmas programming in English at all ... :)

EUDORA - You are right about Dickens and Cevantes: they were kith and kin. As, too, I believe - from different continents - were Herman Melville and Victor Hugo.

LUINFALATHIEL - Alastair Sim's Scrooge is generally rated as the 'best' version of A Christmas Carol, but I'd add Albert Finney and (even though he's not to everyone's taste) George C Scott and our friend BOLL (were not still holidaying in the sun) would certainly add the BBC TV version (now on DVD) starring Michael Hordern - who had played Marley to Sim's Scrooge in both the live action film and the Richard Williams animated version.

I also love Mickey and the Muppets and (despite getting the materialization of the Christmas ghost in the wrong order) Mr Magoo's Christmas Carol, which was the first filmed version I ever saw...

As for the Dick Williams film in this blogpost it is, I think, one of the most succint - yet complete (in terms of emotion) - telling of the tale...

I think I saw this once or twice before. But not in a long time. Thanks for posting it! There are so many great versions of this and it's one of my favourite Christmas tales.

I used to have a boss very like Scrooge, and every Winter I'd be reminded of the little rats in the "Muppets" version of Scrooge. Who are so cold but must pretend it's warm. That always cheered me up

DRAGONLADYCH - I do hope you are now more happily employed! Have a wonderful Christmas...

Thank you! And same to you!
I am still employed there but there's a new boss... much better.

You are right Mr . Michael Hordern remains one of my faves although so does Finney !
PREAP : The run up to Christmas in which one inevitably spends hours discussing versions of films they never seem to have the time to watch.