There's always this panic in our household every December when the first Christmas card drops smugly through the letter box...

I say smugly because it's almost as if - in addition to the standard cheery greeting - it were saying, "There you see! It can be done! Christmas cards can be sent out in good time and don't really have to be left until the night before Christmas!"

But this year the card that won the race arrived on the penultimate day of November and I couldn't even bear to open it for two days - indeed, I'll confess, I actually considered shredding it - since I honestly did not want to know which previously well-thought-of friend was not only so organised but also so heartless as to inflict such a rank unkindness on poor, hopeless folk who haven't even got around to even thinking about Christmas cards...

Anyway, I'm now struggling to finish my cards - a task that is truly never complete until late January of the new year when the final stragglers arrive: always, of course, from people you forgot to send to or decided to drop from the already far-too-long list of recipients...

So, before you get (or don't get) a card from us, here's a seasonal reminder of tomorrow's sale of E H Shepard's Winnie-the-Pooh drawings at Sotheby's, about which I wrote on Sunday. 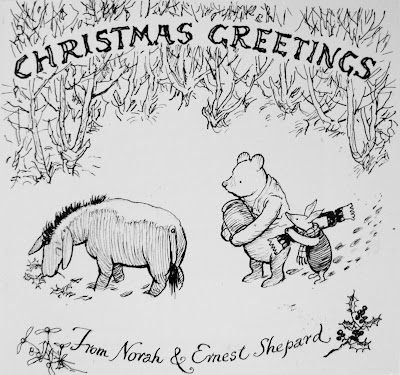 This is the original art for one of Ernest Shepard's personal Christmas cards featuring A A Milne's Pooh characters and is expected to fetch £20,000-£30,000 - making it, very probably, the most expensive Christmas card to be purchased this year...

Pooh, Piglet and Eeyore's festive greeting, along with many other highly desirable items, go on sale tomorrow afternoon at Sotheby's New Bond Street, beginning at 2.30 pm.

But here's one Shepard sketch that won't be going under the hammer... 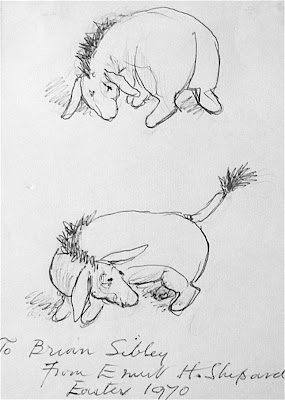