Wandering down Piccadilly the other day, I stopped off - as I always do at this time of the year - to admire the windows of Fortnum & Mason's emporium... 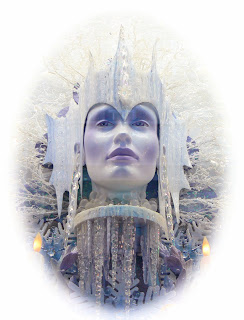 "The flake of snow grew larger and larger; and at last it was like a young lady, dressed in the finest white gauze, made of a million little flakes like stars.

She was so beautiful and delicate, but she was of ice, of dazzling, sparkling ice; yet she lived; her eyes gazed fixedly, like two stars; but there was neither quiet nor repose in them. She nodded towards the window, and beckoned with her hand..."

One of the windows shows the Snow Queen in her sledge riding across the skies carrying off the young boy, Kay, to her icy castle in the North... 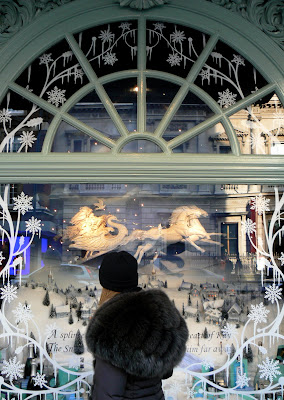 The snow-flakes grew larger and larger, till at last they looked just like great white fowls. Suddenly they flew on one side; the large sledge stopped, and the person who drove rose up. It was a lady; her cloak and cap were of snow.

She was tall and of slender figure, and of a dazzling whiteness. It was the Snow Queen.

"We have travelled fast," said she; "but it is freezingly cold. Come under my bearskin."

And she put him in the sledge beside her, wrapped the fur round him, and he felt as though he were sinking in a snow-wreath.

Which always reminds me of another encounter - that between Edmund and the White Witch in C S Lewis' The Lion, the Witch and the Wardrobe... 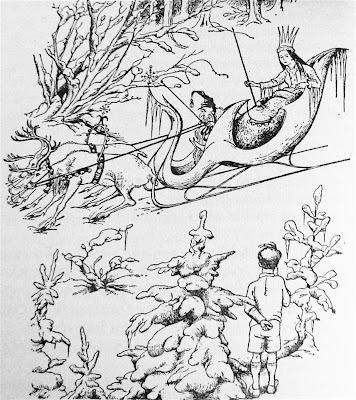 "My poor child," she said... "how cold you look! Come and sit with me here on my sledge and I will put my mantle round you and we will talk."

Edmund did not like this arrangement at all but he dared not disobey; he stepped on to the sledge and sat at her feet, and she put a fold of her fur mantle round him and tucked it well in.

Hans Christian Andersen's Sneedronningen was first published in 1845 and C S Lewis' The Lion, the Witch and the Wardrobe, 105 years later, in 1950.

The Snow Queen and the White Witch are clearly kindred spirits and although they have sinisterly chilly designs on the boys Kay and Edmund, their frosty machinations are happily frustrated - in the Andersen story by the determination of Kay's young friend Gerda... 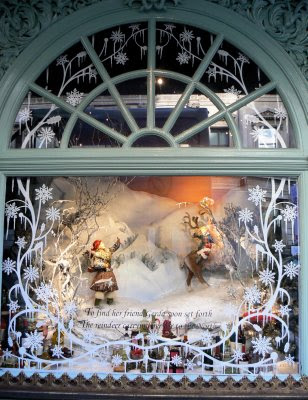 Click image to enlarge
...while in the Lewis book by the love of Edmund's brother and sisters and the intervention of Aslan.

Still, if any of you happen to meet any icy-looking women (especially in Fortnum & Mason's sweet department where they undoubtedly sell that speciality of the White Witch - Turkish Delight) be on your guard...

You can read the whole of Andersen's Snow Queen on The Literature Network.
And you'll find some more Snow Queen windows on my companion blog, Window Gazing. 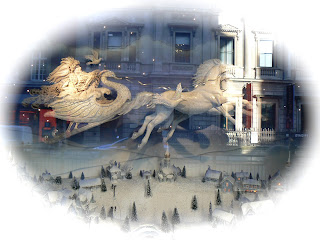 And when you've done all that, you can - if you wish - check out last year's F&M windows that were devoted to the seasonal song, 'The Twelve Days of Christmas'.

I know I read the Snow Queen when I was little, but the only thing I remember about it is that I absolutely loved the story.
nonse: the word for the infinite variety of snowflake shapes!

Pauline Baynes lives on in those definitive pictures Mr B. It's always great to see them again.The White Witch has always been portrayed as manic - going from barely concealed anger to towering rage upon the hearing of a wrong word so it was great to see Tilda Swinton's menace played in a much more chilling fashion...
"He sold you...for SWEETIES"


Munhani : A picture of some exotic and obviously equatorial location that appears, supposedly as comfort but in reality as mockery, on your calendar for December.Several persons (in Mr Sibley's case, dressed only in boxers) are posed being deliberately warmed than you to complete the annoyance.

SUZANNE - Yes, I, too, loved The Snow Queen, overlooking the menace of the imps at the beginning who cause all the trouble with the mirror and the sinister intentions of the Queen ("Now you will have no more kisses," said she, "or else I should kiss you to death!") and just loving the thought of all that snow and a magical sleigh ride!

I similarly succumbed to the blandishments of her sister, The White Witch! I'd have had none of Edmund's reservations; I'd have been on that sledge wolfing into the Turkish Delight before you could say "Ice"...

BOLL - I agree, Tilda was very good on suppressed menace, but really ought to have looked more as Lewis described her and Baynes depicted her.

May I point out that that there have been NO young men in boxers (or any other item of underwear) for a very long time! And, in consequence, nor have we had any recent complaints from the Duchess. You, however, seem intent (for some reason beyond my divining!) upon disrupting the status quo!

Shame on you - particularly as you are about to go off on a holiday to decidedly sunnier, warmer climes leaving he rest of us in the UK to FREEZE!!

I love the scene with the boy looking into a mirror to see himself as a devil!.

It's a very impressive display this year! Makes me feel all Christmassy just thinking about it!

ALEX - Thanks for that photo... I tried in vain to take a picture of that window, but there was too much light from the other side of the street and my efforts were useless...

The lack of young men in boxers is very distressing. Even the Duchess might not be too upset by a brief glimpse. Some of us do, after all, need a bit of winter cheer.

Soneci: The art of displaying well-proportioned men in briefs

Your blog also referred us to last year's F&M's windows of The Twelve Days of Christmas - which gives me leaver to remember that the Brian Sibley/Penelope Keith version is upon us next week on Radio 7.

Thanks, Diva. You are the second person to tell me... I didn't know! The BBC lost its good manners years ago...

Thank you for your sightings and insights. I'm sharing your blog as a Christmas treat for Williams College (USA). This is the Daily Message to students, faculty, and staff which we're posting tomorrow.

1. Holidays Around the World: London
"Wandering down Piccadilly the other day, I stopped off - as I always do at this time of the year - to admire the windows of Fortnum & Mason's emporium...This year, the
tableaux tells Hans Christian Andersen's The SnowQueen..."
Brian Sibley: The Blog
To see the windows, go to: http://briansibleywindowgazing.blogspot.com/2008/12/snowy-windows.html

For another holiday treat, add Sibley's blog to your bookmarks: http://briansibleysblog.blogspot.com/
(Thanks to librarian Wayne Hammond for our introduction to Sibley's blog.)

I was haunted by the Snow Queen for years, after one of our primary school teachers read it aloud to us in class. In turn, my son was haunted by the White Witch, after I read him The Lion, The Witch, and the Wardrobe when he was a little too young. I've written a blog entry about this latter haunting: might I use the Pauline Baynes illustration above (with due credit, of course)? The URL: http://josna.wordpress.com/2010/08/01/curb-your-enthusiasm-a-bedtime-story/

I enjoyed your post. Credit needs to go to the Pauline Baynes Estate, not me! :)

Thank you, and cheers, J