As everyone must, by now, be aware, one of the books I am rather obsessive about is Charles Dickens' A Christmas Carol: apart from writing about several times on this blog - spookily using, in a couple of cases, I now note, many of the same words!

I've also, in my time, I've written a book (A Christmas Carol - The Unsung Story) and a radio programme (Humbug!) about it as well as making my own adaptation which has been presented in various productions, the most recent being the one staged this time last year at the Greenwich Playhouse.

But enough of egocentricity! I also happen to have a fairly impressive collection of illustrated editions from the original drawings made in 1843 for the first edition by John Leech... 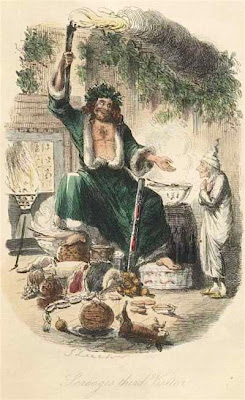 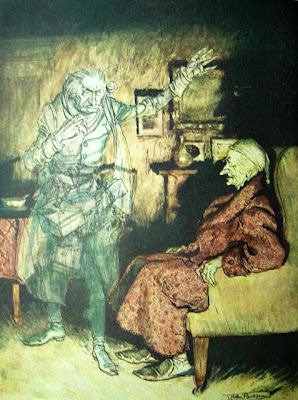 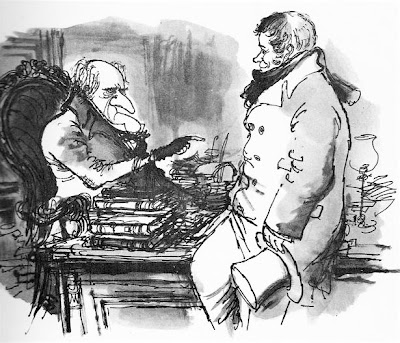 ...to my friend Ian Miller whose terrified Scrooge appears at the top of this blogpost.

The latest artist to tackle Dickens' Ghost Story of Christmas is ROBERT INGPEN whose work I have long admired and who has recently illustrated editions of The Jungle Books and another of my all-time favourite reads, The Wind in the Willows. I was keen, therefore, to discover how he would tackle this story with which I am (arguably) rather too familiar!

The challenge of illustrating the Dickens tale recounting the reformation of the miser Ebenezer Scrooge is that of producing something fresh to enliven the jaded palette of our imaginations that are tainted with a clutter of remembered imagery from various versions of the story - especially those captured on celluloid and featuring Alastair Sim, Patrick Stewart, George C Scott, Kelsey Grammer or Michael Caine and the Muppets.

Well, Robert Ingpen has certainly produced some finely decorative 'settings', such as this snowy vista of Scrooge's childhood home... 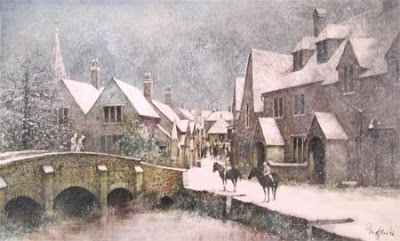 And one or two creepy moments such as this picture of the ghost of Christmas yet to Come showing Scrooge a body - if he did but know it, his own - laid out in death... 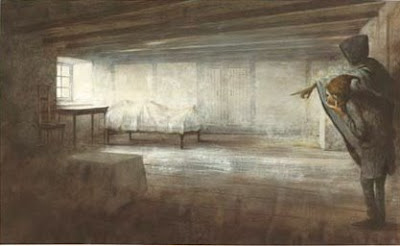 Although this is an interesting example of an artist producing a compelling picture that ignores the author's text! Whilst Dickens tells us that "a pale light, rising in the outer air, fell straight upon the bed," he is clear that "the room was very dark, too dark to be observed with any accuracy..." In Mr Ingpen's over-brightly lit room, Scrooge surely could not have failed to recognise what is his own bedchamber.

The encounter between Scrooge and the ghost of his deceased partner Jacob Marley, is fairly traditional - although the spectre is certainly better fed than most of his kind! 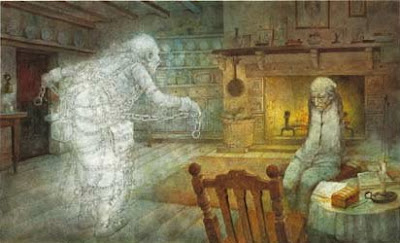 But the illustration that is, alone, worth the price of admission is an inspired picture that is an imaginative addition to those elements of the story we know so well. Prior to his meeting with Marley, Scrooge is seen edging his way along a snowy street towards his chambers pursued by his partner's ghost.

When Marley eventually materialises to Scrooge he tells him: "How it is that I appear before you in a shape that you can see, I may not tell. I have sat invisible beside you many and many a day." I rather like the idea that Marley has long been following Scrooge - just waiting for the right moment to appear... 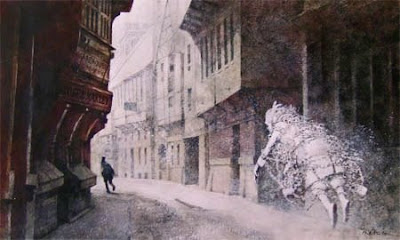 If you've never got around to reading A Christmas Carol (or haven't re-read it for a long time) then this is a good volume with which to treat yourself (or someone else to) this Christmas, especially since it also includes, as a bonus, another of Dickens' Christmas pieces (though not a ghost story) 'The Christmas Tree', again with Robert Ingpen's illustrations.

Brian, have you ever visited Dickens World (Chatham? Rochester? Can't quite remember.) In many ways a cheap and tacky place, bizarrely located in an unfinished out-of-town shopping centre, I seem to recall.

It does have a nifty Pepper's Ghost-style depiction of scenes from a Christmas Carol, which is nice. (It also has ridiculous dramatisations from Dickens, with actors miming all the words.)

Acion: command given to actors at the beginning of a mimed scene.

I've received reports from friends who've been there and MUST go one day to experience the full horror for myself!

I was going to say that the best pictures are those in one's head while listening to David Jason reading Christmas Carol on Book at Bedtime this week. But last night I was asleep within 5 minutes of the programme starting.
FICITHO: The unsuccessful attempt to stay awake during a favourite programme, film or recording. This is usually interrupted by someone switching off the radio or TV, to which the correct response is: "Hey, I was listening to that!"

Marley's assertion that he has sat next to Scrooge many nights in his run-up to the actual haunting seems rather at odds with his later comment that he cannot 'linger anywhere' and his obvious need to be on his way again throughout the whole of their discourse.

Good point! Never spotted that before!