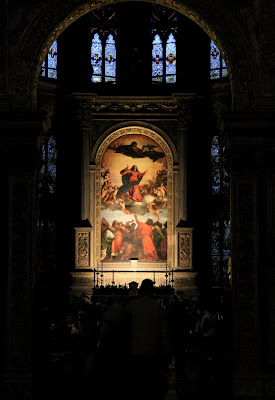 Click images to enlarge
"Pictures, were there, repleat with
such enduring beauty and expression:
with such passion, truth and power:
that they seemed so many young and fresh
realities among a host of spectres." 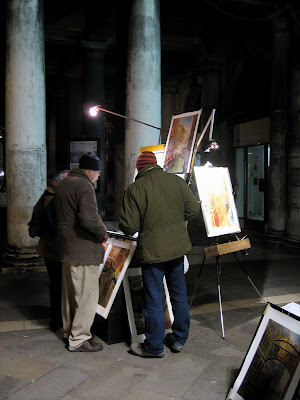 "Painting is the way Venetians write."

"White walls, the paper of the mad."

- Venetian Proverb
***
A few hours after writing this blog posting, I was having an unexpected Venice adventure: I yawned and dislocated my jaw!

We went straight to the Ospidale (water taxi fare: €45!) but the doctors in Pronto Soccorso (the Venetian equivalent of A&E) couldn't get it back into its correct sockets, so I had to wait three hours - in what was excruciating pain - for a specialist to come over from the mainland. He was terrific, but had a heck of a struggle because the jaw had been dislocated for such a long time.

Finally - after a needle full of Valium in the bum - the muscles relaxed sufficiently for him to get the jaw relocated and we set off by boat back to our apartment.

BUT --- almost an hour later, and three stops down the line, out it popped again! As soon as we could, we jumped ship and headed back to back to the Ospidale...

The specialist (who was, by now, back home on the mainland)was telephoned and turned round and set off across the lagoon once more.

Another three hours of agony ensued until he got there and put things right for the second time. On this occasion, however, he decided that - having had my jaw out of sync for best part of six hours - I would have to have to bandaged up to prevent it from moving until the muscles relax and go back to where they should be...

So I now look rather too like Marley's Ghost with his kerchief wound about his head (to keeping his jaw from dropping open) and I've got to remain like this - on a liquid-only diet, too! - until Monday when I will see more specialists at the Ospidale who will advise me what's best thing to do next...

For more Venice imagery, visit my website to view the album Venice Observed and then follow the links at the foot of that page to three further albums of photographs.
Posted by Brian Sibley at 00:01

Oh, poor Brian, I'm very sorry for you. What a bad luck, I didn't know that a yawn could be so dangerous.

Well, patience, I hope the doctors will give you tomorrow the best treatment.

Oh dear, Brian - so sorry to hear about your misfortune.
I wish I had the strength of character to join you in a liquid diet as a means of showing solidarity.
reworpo: the art or jaw re-alignment

The chief difficulty is not speaking the lingo and finding that most medics don't speak English; plus the fact that in Venice (maybe in Italy in general) no one is allowed to be in the room with you during the 'consultation' - which is pretty scary not to mention a bit short-sighted since two people with broken Italian are (possibly) better than one...

I used to be unable to open my mouth in the mornings because I gritted my teeth during the night. I always feared that I would dislocate my jaw when trying to open it.

Must be really horrid.

I can at least imagine your adventure as the vaporetto we caught from the airport stopped at the hospital... don't think I'd fancy it by taxi though having seen them charge nearly £100 to do the journey we did for £8 ! Hope you're feeling a bit better now. I remember having a thumb stuck back in and it was pretty painful.
TOROXI : The block of industrial buildings in Venice that you only ever get to see when you've got on the wrong boat

Oh, dear, Brian: I've told you not to try to eat a whole cake at once!
Liquid diet sounds good to me (pas the Metaxa!) but the hospital saga sounds pretty grim.
All the best from Sheila, Hippolyta and...

Roger O B...
Neearple: synthetic apple-flavoured drink for those on liquid diet

DRAGONLADYCH - Don't ever try it... :-[ (This symbol represents me keeping my mouth shut and not smiling!)

BOLL - The only reason we used a taxi was to get to the hospital as quickly as possible: it took us 15 minutes (by cutting through the various canals) whereas to have gone by vaporetto would have taken nearer an hour by going round the outside of the island...

You get to see the Toroxi though MrB !

Hmmm... By the way, BOLL, all boats do not go to the Lido: you were just lucky - you could have ended up on Torcello...

But why did you stay on the Lido in the first place? All those cars! Next time - if there is a nest time - stay in the city, even if it's in a really cheap B&B... The Lido is really only good for sun- and sea-bathing or, of course, for doing Dirk Bogarde Death in Venice impressions...