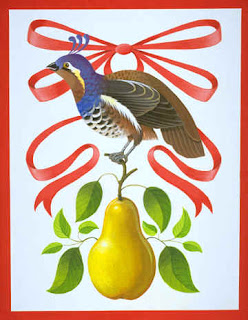 Apropos of 'The Twelve Days of Christmas' (new readers start here), you may have already received the following, intriguing seasonal e-mail (circulating for the last 10 years) that purports to explain the origins of this curious old song that were so familiar with with that we scarcely pause to consider what it actually means...

There are various versions of this e-mail, here's one of the shorter ones...

There is one Christmas Carol that has always baffled me. What in the world do leaping lords, French hens, swimming swans, and especially the partridge who won't come out of the pear tree have to do with Christmas? This week, I found out.

From 1558 until 1829, Roman Catholics in England were not permitted to practice their faith openly. Someone during that era wrote this carol as a catechism song for young Catholics.

It has two levels of meaning: the surface meaning plus a hidden meaning known only to members of their church. Each element in the carol has a code word for a religious reality which the children could remember.

* The partridge in a pear tree was Jesus Christ.

* Two turtle doves were the Old and New Testaments.

* The four calling birds were the four gospels of Matthew, Mark, Luke and John.

* The five gold rings recalled the Torah or Law, the first five books of the Old Testament.

* The six geese a-laying stood for the six days of creation.

* The eight maids a-milking were the eight Beatitudes. [Matthew 5:3-12]

* The ten lords a-leaping were the ten commandments.

* The eleven pipers piping stood for the eleven faithful disciples.

* The twelve drummers drumming symbolized the twelve points of belief in the Apostles' Creed.

So there is your history for today. This knowledge was shared with me and I found it interesting and enlightening and now I know how that strange song became a Christmas Carol... So pass it on if you wish...

But before you do, you should be aware that just because it's landed in your In-Box rather than Junk, does not mean it's necessarily TRUE!

Check out the invariably reliable hoax-busters, Snopes.com to read what they say have to say about it; although the faithful may care to note that The Voice ('Biblical and Theological Resources for Growing Christians') does not agree!

And, if you've still got a spare few seconds, you'll find more about the history of the song - and several fascinating variations - noted on Wikipedia.

If you're a fan of the song, you might want to listen to "A Musicological Journal Through the Twelve Days of Christmas" There's an unedited version of it on YouTube:

(I think my choir has done a better version of that, but it's not available online)

Everyone Else: You MUST check this out... That song as rendered by Handel, Wagner, Strauss, Ponchielli and others... I'll leave you to spot the rest...