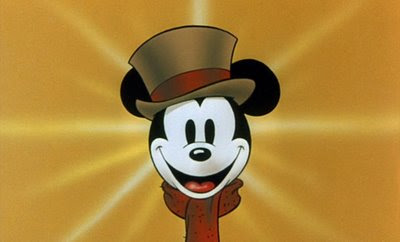 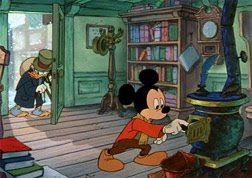 Other familiar Disney characters involved included Daisy Duck as the love of Scrooge's younger self and Goofy as an accident-prone Ghost of Jacob Marley providing more laughs than frights... 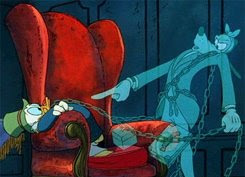 The Ghost of Christmas Present (below right) was played by Willie the Giant who had previously appeared in another Mouse cartoon 'Mickey and the Beanstalk' (below left) in the rather less-well-know Disney feature, Fun and Fancy Free...

The other Ghosts - of Christmas Past and Future - were played Pinocchio's pint-sized conscience, Jiminy Cricket, and Black Pete (aka Peg Leg Pete), Mickey's arch-Nemesis from the early cartoons and comic strips...

The film, which picked up an Academy Award nomination was animated by a new generation of Disney artists who would go on to become future stars of animation including Glen Keane (responsible for the Beast in Beauty and the Beast and the title character in Tarzan) and Pixar founder, John Lasseter.

The film received a lot of publicity at the time since it was Mickey's first film appearance in 30 years. Indeed, I appeared on BBC TV's Newsnight (wearing a Mickey Mouse sweater) where I was interviewed about Mickey's career and come-back by Joan Bakewell in her plumiest tones!

What I knew at the time (being an anorakish Disney nerd) was that this wasn't the first time Mickey Mouse and Co had had a bash at A Christmas Carol. In 1975, the Disney company had released a gramophone record on the Disneyland Storyteller label entitled An Adaptation of Dickens' Christmas Carol Presented by the Popular Repertory Company, The Walt Disney Players. The cast was a little different: the Ghost of Christmas Past and Future were played by Merlin from The Sword in the Stone and the Wicked Witch from Snow White and the Seven Dwarfs. 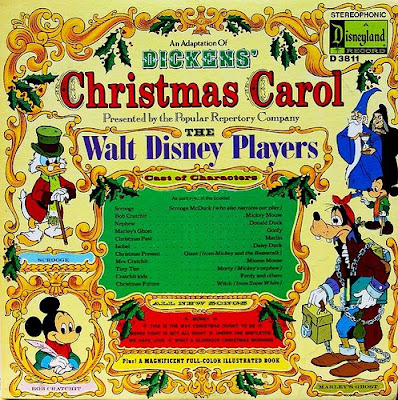 Click image to enlarge
I loved the conceit of Disney characters belonging to a rep company - a similar idea to that previously used in the 1962 TV show, Mr Magoo's Christmas Carol and which would later be revisited in 1994 for another TV special, A Flintstones Christmas Carol.

The Disney album was written and co-produced by the Scottish-born actor, Alan Young (well known as the human lead in the classic TV sit-com about a talking horse, Mister Ed) and the record later became the inspiration for the movie, although Alan Young (who had also spoken for Mickey Mouse and Merlin) almost didn't get to reprise the role of Scrooge McDuck.

For some reason - the studio said they thought Young wouldn't want to play the part - were auditioning another actor who just happened to know Alan Young and showed him the script. Young immediately realised that it was, in fact, a version of his script and the part he had created on record! A request to be auditioned led to some embarrassed back-peddling by the studio and Young, once again, got to play the miserly, curmudgeonly Scrooge.

What is fascinating is to discover - courtesy of Disney History - that years before the film or the record Donald Duck had played all the parts in a comic-strip version of A Christmas Carol published in the December 1949 edition of The Rexall Magazine, given away by the Rexall Drug Company... 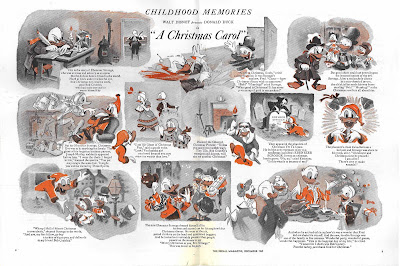 Click image to enlarge
So, there you are: three Carols for the price of one blog! And if you've never seen Mickey's Christmas Carol, this trailer will give you a taster of this Disney take on the Dickens tale...

Believe it or not, I've never seen this! I actually have it and have been saving it for a Christmastime viewing, but forgot all about it....thanks for reminding me!

Glad to have obliged, guys!

CHAREA : A feeling that a good friend, having finally got rid of you for a while, gets out all his best blog material and runs it back to back when you´re away.

CHAREA : A feeling that a good friend, having finally got rid of you for a while, gets out all his best blog material and runs it back to back when you´re away.
PROWEDID : A feeling of anticipation about some important computerwork that one is looking forward to doing on ones return.

They must have had so much fun making it- I'm always amazed at how good most of the animation is in this one, even though they were reinventing themselves at the time and a lot of the work on the features done at the time was shamefully bad in comparison!

Didn't realise this message had got through Mr B. Was in an internet cafe and ran my time down to, literally, the last second before pressing the post button.
DRANIM : The unheard-of yuletide cocktail that comes, only as a Christmas present, but is totally unlike anything you have ever tasted and works better as an aftershave than your other present, given for specifically that purpose.