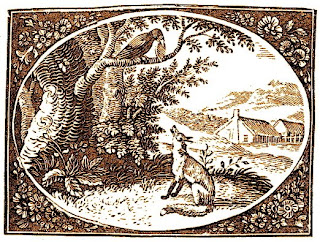 I'll never forget the Christmas - too long ago now to attach a date to - when I spotted a book in my local bookshop entitled The Fox At The Manger. It was written, it said on the cover, by P L Travers, the author of Mary Poppins.

Although, at the time, I had yet to read any of the books about Miss Poppins, I knew and loved the Disney musical film based on her exploits whilst serving as a "practically perfect nanny" in the household of Mr and Mrs Banks in Cherry Tree Lane.

The Fox at the Manger, I discovered, was nothing like Mary Poppins - except that it was a tale shot through with magic! It re-told the events of the first Christmas - familiar from every nativity scene - but with an unexpected twist.

The animals in the Bethlehem stable - donkey, cow and sheep - who witness an unusual birth in the midst of their straw-filled little world are dismayed and alarmed when an alien creature enters their domain: a red, furry, fox - the chicken-stealing outlaw of the countryside. But the fox has come to the manger to bring his own, unique gift to the Christ Child...

What that gift is you must read for yourself --- or discover it by listening to a radio dramatisation that I made of the story some years back and which is being repeated this Christmas on the BBC.

The Fox at the Manger which stars Dame Wendy Hiller as the storyteller and Alec McCowen as the Fox is being broadcast on BBC Radio 7 at 10.15 am and 9.15 pm on Christmas Eve and, again, at 2.15 am on Christmas Day morning.

It will also be available to hear, on line, via the BBC's iPlayer for seven days following transmission.

***
And, while on the subject of Sibley radio shows, And Yet Another Partridge in a Pear Tree... my 'Cautionary Tale for Christmas Showing that it is Better to Give than to Receive' can still be heard, on-line, via the BBC's Radio 7 iPlayer (you'll find it on the alphabetical listing of shows) but you've only got today and tomorrow to tune in...

Tomorrow we go to VENICE, so any delays in approving blog-comments will be due to changes in European time zones or, more likely, my inability to get on-line!

It has been said of the city which the Venetians call La Serenissima...

"Other cities had admirers,
Venice alone has LOVERS."

- Paul de Saint-Victor
But it has also been said...

"The abuse that the city suffers derives
from its own fatal gift for manufacturing
endlessly seductive clichés." 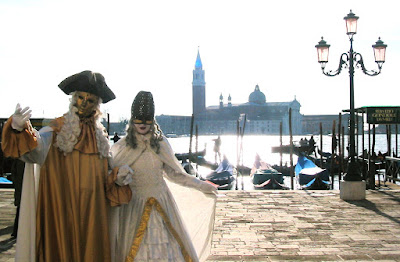 So, welcome to one of the most complex cities in the world!

As for buttons, he can't wait to get there!


Images: The Fox and the Raven from Aesop's Fables (and later The Fox at the Manger) by Thomas Bewick; Venetian Masqueraders © by Brian Sibley
Posted by Brian Sibley at 00:01

I hope the three of you have a wonderful Christmas.

If there's anyone left in the world who hasn't heard 'The Fox and the Manger',make sure you sit down and concentrate 100% It's probably one of the best Sibley dramatisations and the music is excellent !
AUNSU : The moment of realisation that Christmas is upon us again but there is still half a shelf of obligatoy DVD's to fit in before the big day.