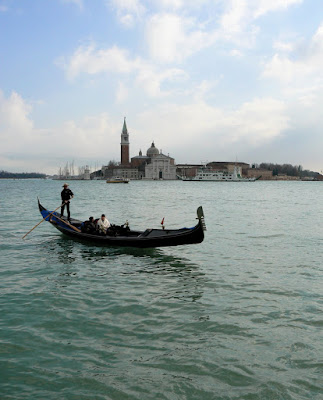 Click on images to enlarge
"'But where do the people walk?'
inquired I of my gondolier." 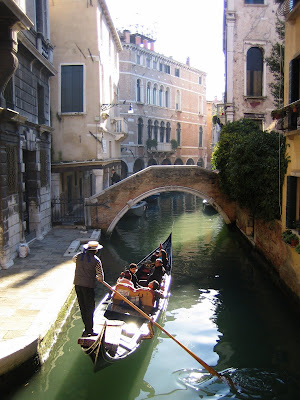 ***
And speaking of the need for gondolas, here's a photo of a famous gondola-passenger - Walt Disney - with his wife, Lilian, and youngest daughter, Sharon, being ferried up the Grand Canal in 1951, when Walt was attending the Venice International Film Festival.

They are passing what is now the Bauer Hotel (a stone's throw from our apartment), possibly on their way either from the celebrated Hotel Danelli or en route to the equally famous Hotel Gritti Palace... 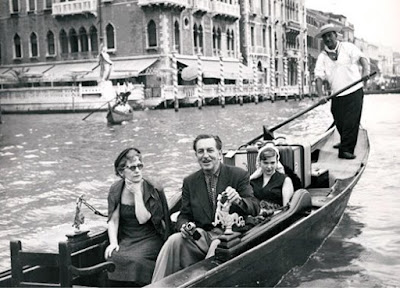 This photo is really fascinating because - from the presence of the suitcases behind the passengers - it is clear that when it was taken (almost sixty years ago) gondolas were still being used as taxis, taking people wherever they required to go in the city, rather than - as now - as a mere tourist attraction following a site-seeing circuit...

I was just imagining asking one of the gondoliers who have a station behind our apartment if they'd take me to the hospital for my appointment this morning!
Images: David Weeks & Brian Sibley © 2006/8; photo of Walt in Venice from Michael Barrier.


For more Venice imagery, visit my website to view the album Venice Observed and then follow the links at the foot of that page to three further albums of photographs.
Posted by Brian Sibley at 00:01

The water was pretty choppy up that way Mr B but I wondered whether that was merely due to the relentless traffic on it.When you think that, as many gondoliers start from the area near St Mark's Square, they briefly share the water with some of the largest passener liners in service, I'm sure a little trip round to the hospital would be a mere change of scenery ! May take a while though...
BABCL : A small plastic item found under the settee during vacuuming which is probably something out of a Christmas cracker but no one wants to throw away in case it isn't.It will sit gathering dust in a prominent position until May, waiting for an owner to reclaim it.

Hope things go well at the hospital this morning...

The title of your post struck me instantly as the name of a friend's blog; a friend, incidentally, who recently moved to a small town in Texas, curiously the same town as another friend through whom I made a contact in New Zealand that led to my visiting Weta Workshop and, indirectly, to reading your book and our virtual meeting. Odd and wonderful how sometimes everything seems connected.

Have a Happy New Year and best of luck with that jaw, Brian!

Thanks, DIVA... Essentially, the jaw has to remain bandaged up; I continue with the drugs (muscle relaxants and pain-killers), no chewing (soft food or liquids only) and, as much as possible, keep the trap shut!

You, know, RYAN, my friend P L (Mary Poppins) Travers often used to quote E M Forster's observation: "Only connect..." As you say, connections are everything...