What were you watching on television over the Christmas holiday period and how did it measure up to your seasonal telly memories from the past?

If you are British and over the age of thirty then those memories would undoubtedly include Christmas specials from the likes of Mike Yarwood, Paul Daniels, The Two Ronnies and, of course, Morecambe and Wise... 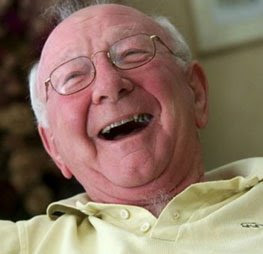 The man responsible for those and many other great BBC television programmes was BILL COTTON (left) who died earlier this year and who at various times in his long and prolific career was Head of Light Entertainment, Controller of BBC 1 and Managing Director of Television.

The programmes which he either created or oversaw include The Generation Game, Jim'll Fix It!, Parkinson and a legion of memorable sit-coms such as Dad's Army, The Good Life, To the Manor Born and Monty Python's Flying Circus.

As a huge fan of many of those shows it was a thrill to have the job of researching and writing a two-part tribute to this great TV impresario, Showman and Star Maker - A Tribute to Bill Cotton which is being broadcast on BBC Radio 2, beginning tonight at 7:00 pm with the second part going on-air at the same time tomorrow.

The programmes are presented by Paul O'Grady and feature, among others, Bruce Forsyth, John Cleese, Val Donican, Cilla Black, Rolf Harris, Des O'Connor, Michael Parkinson, Terry Wogan, Sandie Shaw, Sue Lawley and Tom Jones - all of whom I got to meet --- in person!!

Here's a little anecdote from one of those encounters...

Bruce Forsyth gave me a great interview talking about the impact which Bill Cotton had on his career and at the end of it I mentioned that I had a bone to pick with our Brucie...

"Well," I told him, "when I was a youngster, I wrote to you when you were the star of the TV hit Sunday Night at the London Palladium, asking for an autographed photograph. I got the photo but I was terribly disappointed because the photo I got back had a printed autograph!"

"Ah," said Bruce, "well I used to get masses of fan mail... In fact, I remember turning up at my agent's office one day and there was this long line of mail sacks all the way down the hall. 'What's all that?' I asked. 'Your mail!' he answered. So, the agent used to send out the photos for me..."

"Hmmm," I replied, "well, Bruce I was in one of those sacks!" And I produced the photo to prove it.

"Right!" said Brucie, "give it 'ere!" And grabbing a pen he signed it again - this time with a genuine signature and, as the note on it says, IN REAL INK! 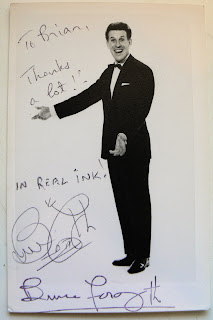 And here is Bruce playing piano as a guest (following Jamie Cullum!) on another of those shows launched by Bill Cotton, Parkinson...

So, once again you can catch Part One of Showman and Star Maker - A Tribute to Bill Cotton on BBC Radio tonight at 7:00 pm and Part Two can be heard tomorrow, New Year's Day, at the same time.

Having followed the reviews of the year in both the Guardian and Observer weekend magazines I've discovered that Bill Cotton died on my birthday! So I'll no doubt remember that next year.

Looking forward to hearing the programmes, probably on the 'Play It Again Sam' apparatus on the computer later in the week.

'Tis a sign of the times that I immediately ignored the time of broadcast instead of contemplating another evening of turning over tapes and sitting with my finger on the pause button ! Go bless Listen Again ! Sounds like a really good show.
SPUNEGRA : The three minutes of inappropriate and irrelevant waffle and exciting 'whoosh' jingles that precede any programme on Radio 7 which are added because the station heads think we need to be excited and couldn't possibly find a channel interesting that just had people talking all the time.

Today's Guardian Radio Pick of the Day: "Showman and Star-Maker ... offers a chance to dwell on TV's golden age". (And they've managed to spell Bill Cotton without a typo) We're looking forward to listening to it.

Grooeti: An Italian dish of pureed spaghetti and gruel for those unable to eat solids (hope you're not reduced to this, Brian).

Waaaaaaaah! You got to meet Tom Jones? You lucky man! Well the rest of this list isn't too bad either! I hope I can listen to these online.

Thank goodness for YouTube, so many gems are up there to spark memories or let the younger generations discover things (my dad loves to show me old indian movies from his childhood)

By the way there is also an old Morecambe and Wise show on YouTube with Tom Jones as a guest.

Loved the Singing in the Rain parody also. One of my all time favourite movies.

Looking forward to hearing this. The BBC did a one hour TV doc over the Christmas break but I thought it was weak and directionless, despite the number of talking heads they seemed to get access to.

Can't complain too much though as Christmas TV, which is usually dreadful, was pretty good on Christmas Day: new Wallace and Gromit, new Royle Family and new Stanley Baxter. Bliss!

In fact the only "disapppointing" TV on Christmas day was (yet again) the Doctor Who "special" which despite superb efforts from David Morrisey acting his chops off turned into the usual poorly-written, infantile tripe from RTD :(

P.S. Happy New Year to you and David. Sorry to read about your woes. 2009 has to be better right?

BOLL - Spunegra is, indeed, the curse of the BBC...

SHEILA - Thanks for the review. No chance of their misspelling my name since, sadly, I get no credit in any of the publicity for the programmes...

DRAGONLADYCH - Mind you, TJ is very old, bless him - I felt positively youthful...

IAN - Thanks for the TV resume; pity about Dr Who, but no surprises there...

Ha, ha! Tom is the same age as my dad I don't think it's that old, but I know what you mean!
Still, I always say it should be illegal to be that sexy at his age!

I'm afraid I bored my parents during the first part of our New Year celebration listening to that show, I got to hear the segment with Tom! And we heard you too, my mum went "Who is this Brian Sibley?" I need to show her my EE of Lord of the Rings again ;)

Superb story about the signed pic. I've got an LP of him singing straight, and I always used to play it for visitors and ask them to guess who it was. When I met him, I persuaded him to sign it.

Nice story, L F BARFE, thanks for sharing it...